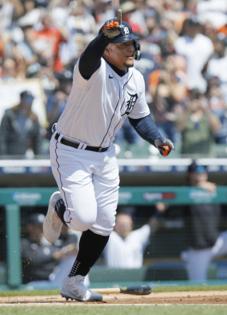 DETROIT — Might want to hold off on Miguel Cabrera’s retirement party.

A day after he talked about the seriousness of his knee pain and the uncertainty of his future, Cabrera wanted to clarify one thing.

“I’m not going to retire,” he said, pulling me away from a chat with Riley Greene. “Not until after next year when my contract is done. They didn’t understand what I said. No way am I going to quit.”

Cabrera and manager AJ Hinch have discussed limiting his playing time the rest of this season. He’s going to be the team’s designated hitter every other day, for the most part. He was not in the lineup Friday night.

"But it's nothing like — I don't think about next year right now. I think about trying to finish healthy this year."

It was the first time Cabrera seemed to indicate he might consider leaving the game before his contract expired. He’d always been steadfast that he would honor his contract, which will pay him $32 million this year and next, and play through 2023.

That news spread fast and was a topic on MLB Network and other national talk sports programs. Cabrera seemed bent on setting the record straight Friday.

“You’ve got to correct that,” he said. “I’m not going to quit. I am going to play out my contract.”

He understands, certainly, that his health may ultimately decide how much or even if he plays next season. He’s played through chronic pain in his right knee the last five years.