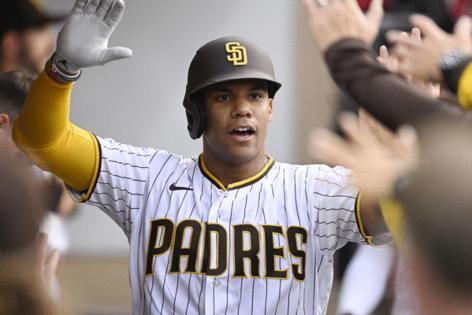 SAN DIEGO — When Padres CEO Erik Greupner and his college-bound son sat down Tuesday morning at The Original Pancake House in Encinitas, the baseball executive simply sought a father-son bonding moment and breakfast.

What he discovered amid all those waffles and eggs, though, was real-time proof the seismic trade for 23-year-old superstar Juan Soto soon would change more than a franchise.

Diners had no idea the man in the cap and workout clothes already knew what was about to ripple through the restaurant.

“When the news broke on social media, every table around us, one by one, began to talk to each other about it,” said Greupner, who was with President of Baseball Operations A.J. Preller the night before at Petco Park as the deal was being sealed.

“Next to us, a man and his wife, he said, ‘I can’t believe this. Juan Soto is a Padre. Do you have any idea how much our tickets are worth?’ ”

That’s a hint at why the Soto trade outsizes the player’s larger-than-life self, an offensive talent so off the charts he has been hailed as a modern-day Ted Williams, the San Diego son and ageless hitting gold standard.

He’s not just a one-man financial engine, creating windfalls for season ticketholders. He’s a 6-foot-2, 224-pound bundle of hope for San Diego, a city gut-punched by the cowardly exit of the NFL’s Chargers after 56 seasons. He’s a chest-puffing opportunity for a city that outgunned the game’s biggest brands, including the despised Dodgers.

In a sports sense, San Diego has been the boyfriend or girlfriend jilted again and again and again. Not one NBA team, but two — the Rockets and Clippers — abandoned the city. When the Chargers drafted quarterback Eli Manning No. 1 overall in 2004, he said he would refuse to sign in a nationally embarrassing snub.

The Padres drafted troubled local star Matt Bush No. 1 overall, instead of Hall of Fame lock Justin Verlander. They allowed Dave Winfield to drift away in free agency and traded away Ozzie Smith and Roberto Alomar, three players immortalized in Cooperstown, N.Y. Basketball legend Bill Walton, constantly injured and slowed in his hometown return, called his inability to deliver for the Clippers his greatest regret.

The trail of sports sorrow caused an Associated Press columnist to slap the grim title of “Worst Sports City in America” on San Diego in 2018.