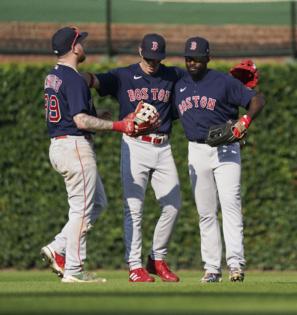 We all remember what happened last July.

The Red Sox entered the month three games up in the American League East, then exited the month having fallen out of first place without adding any immediate help at the trade deadline.

Chaim Bloom and Co. were ready to shoulder the blame until late arrival Kyle Schwarber put the team on his back in mid-August and the Sox narrowly snuck into the postseason.

This July should be even more strenuous.

The Red Sox will get a challenging welcome back to Fenway Park for Independence Day on Monday, when the Tampa Bay Rays come up for a four-game series that’ll set up an entire month of stiff competition.

The Rays are coming off three straight wins in which they scored 24 runs against the Blue Jays, this after enduring an extended slump at the plate that lasted nearly all of June. The Sox are up just one game on the Rays in the division and a half-game ahead of the Jays.

But this series isn’t the last of it. Beginning Monday, each of the Sox’ next 27 games come against teams with a winning record. Their next 14 games are exclusively against the Rays and Yankees, first at home, then in Tampa and New York, respectively.

That brings them into the All-Star break, which they’ll come out of with three games against the Jays, four against Cleveland, three against Milwaukee and three against Houston.

And don’t be fooled from the Sox’ big June in which they looked like a juggernaut in the American League. They went 20-6 in the month. But when playing against teams that look like playoff contenders (the Cardinals, Guardians and Blue Jays), the Sox went 5-4. They’re 15-16 against teams with winning records this year.