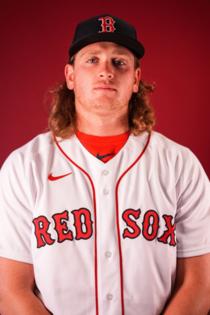 PORTLAND, Maine — Jay Groome learned a valuable lesson as he worked back from the Tommy John surgery he had in 2018: Patience.

“It kind of made me a firm believer in don’t look too far ahead,” Groome, one of the Red Sox’ top pitching prospects, said this week. “I think even when I was rehabbing, I was looking too far ahead, so I would get down on myself a lot, because I wasn’t at that stage.

“But I finally realized everyone’s different, just move at your own pace and time will work itself out.”

Six years since being drafted by the Red Sox in the first round, Groome is carrying that same mindset. But it’s also hard for him not to daydream a little.

It’s an exciting time for the top pitching prospects in the Red Sox’ system. Some, like Josh Winckowski and Connor Seabold, are getting big-league opportunities. Others are moving up to Triple-A, like top pitching prospect Brayan Bello. Chris Murphy, a close friend of Groome, got the call to Worcester last week.

Groome, meanwhile, is continuing to grind away in Double-A Portland, where he’s been pitching since last September. He’s one of two pitchers on the 40-man roster (Bryan Mata, too) who are in Double-A, the rest in Triple-A or the majors. But while he may be a bit behind, Groome doesn’t feel too far away from experiencing his dreams.

“It’s always in the back of my head, especially now that Murph got promoted,” Groome said. “It’s like, wow, it’s one step closer. Who knows what can happen? Just keep being diligent with your work. It paid off for Murph.”

When he returned from Tommy John in 2019, Groome said he set two goals for himself: Stay healthy and pitch in the big leagues.

The latter, obviously, will take more time, but he has stayed healthy. He just needed to exhibit some more patience to really start proving himself again. After COVID-19 canceled the 2020 minor league season, Groome finally experienced a full season in 2021, when he made 18 starts for Salem before moving up to Portland for his final three starts.

This season, Groome has been trying to build on that. The results have been up and down – his walks are up – but that’s part of the process as he builds more confidence and shows he can continue to be relied on every five days through a full season.