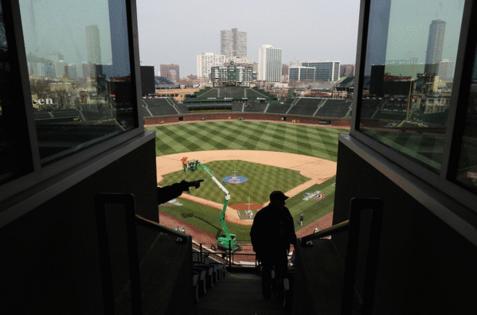 The Chicago Cubs owners have spent the last decade-plus trying to emulate the Boston Red Sox.

Whether it was hiring Theo Epstein as president of baseball operations, renovating Wrigley Field the same way as Fenway Park, signing free-agent pitcher Jon Lester, creating their own TV network or exploring the purchase of a Premier League soccer team, there seldom has been an idea out of Boston the Cubs couldn’t borrow.

If they could’ve gotten away with playing “Sweet Caroline” during Sunday’s 4-2, 11-inning loss to the Red Sox at Wrigley, you know the Cubs would’ve done it in a heartbeat.

“There is something flattering about it,” former Red Sox CEO Larry Lucchino once told me of the copycat Cubs. “If imitation is the sincerest form of flattery, then we’ll take it.”

So it must’ve been a crushing blow Saturday to Cubs Chairman Tom Ricketts and President of Business Operations Crane Kenney when Red Sox rookie pitcher Josh Winckowski gave a thumbs-down review of Wrigley.

“A little underwhelming,” Winckowski said after being charged with the loss. “Fenway has a presence to it. I really didn’t get that here, to be honest. I said to my mom last night, this place is very stock standard.”

That’s the worst insult one could hurl at the Ricketts family, which claims to have spent $740 million to renovate the ballpark in its 1060 Project. The Cubs called it the “preservation” of Wrigley and even slipped a Fenway Park photo into their renovation presentation to show how their video board would be integrated seamlessly into the ballpark.

Skeptics looked at all the changes as a way to rationalize sky-high prices, just as the Red Sox owners did at Fenway.

But even with all of the changes catering to the ultra-expensive premier clubs and Cubs sponsors, Wrigley Field still is considered a baseball mecca, a piece of Americana and — at the very least — a kind of cool place to watch a game.