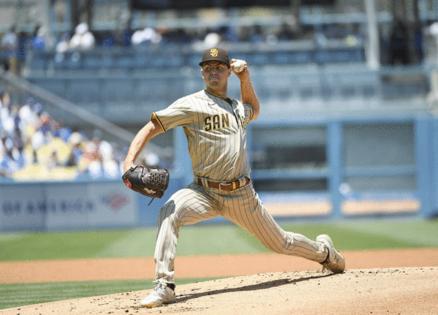 The Padres, and Dodgers for that matter, learned something about rookie starter MacKenzie Gore on Sunday. Because of it, Gore undoubtedly learned a whole lot about himself.

There's toughness. There's fight. There's a pool of resiliency, forged in a situation and setting only a game like Sunday's can provide, that revealed the specialness the Padres banked on with the 23-year-old along his bumpy road to proving he belongs.

Gore muscled his way out of a bases-loaded, first-inning jam after allowing back-to-back doubles to Mookie Betts and Trea Turner six pitches in to steady things in a 4-2 win that staunched serious series bleeding at Dodger Stadium.

He could have quaked or caved. He did neither.

"These type of things make you tougher and make you better as a younger player," Padres manager Bob Melvin said. "When you're carving up and you're going through the lineups easily, it's one thing. But when you have to fight and do things a little bit differently, (it) makes you a better pitcher and makes it a little tougher down the road."

When Betts and Turner led off the game with doubles to the same mailing address in left for a run, the floodgates did not open. When a miscommunicated infield pop-up between Gore, Eric Hosmer and Manny Machado off the bat of Turner found mound rather than mitt in the second, the wheels stayed attached on the wagon.

When the pitches piled up, including 29 in the first inning alone, the white flag remained benched.

"You step off (the mound) and you go, all right, we need to figure out how to keep them right here," said Gore, who stayed on his legs through 5 2/3 innings by allowing just three more hits through 100 pitches. "You need to step off, take a deep breath."

Plays like Jurickson Profar rushing in to trim time and distance off freddie Freeman's liner to left and gun down Betts at the plate in the fourth helped, as much as rookie Jose Azocar being cut down at home in the third hurt.

No matter how many times the roller coaster jarred, though, Gore found center.