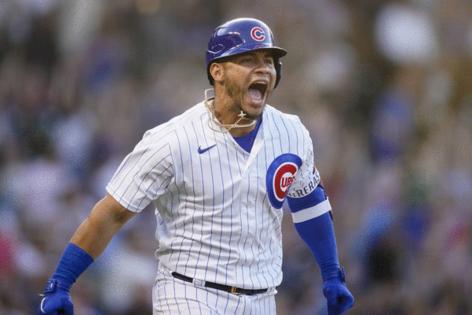 “This is my house, and it’s been my home for 14 years,” the catcher said Sunday in St. Louis.

Cubs fans want Contreras to get his extension. He arguably is their most popular player and on his way to his third National League start in the All-Star Game.

Team President Jed Hoyer has done nothing but praise Contreras’ play and leadership. During a Q&A with season ticket holders Monday, Hoyer said “everyone loves the way he plays, with so much energy and passion, and he is having a great year.”

Yet consensus opinion is that Contreras will be dealt by the Aug. 2 trade deadline.

It makes no sense to lose your most valuable asset without getting multiple players in return, and last season’s sell-off proved no one is untouchable under Hoyer. It doesn’t have to be that way.

If Contreras desperately wants to stay, he should order his agent to get something done before the deadline and sign an extension. Lance Lynn did exactly that last year with the White Sox.

It might not be what Contreras would get on the open market, but certainly Hoyer would make Contreras among the highest-paid catchers in the game. He definitely is one of the best hitting catchers, but not among the top defensively.

Lynn aside, it’s rare that a player signs only a few months from hitting free agency. So if Contreras desires to test free agency after the season, as is his right, Hoyer needs to do what’s best for the organization and deal him. It’s that simple. Better to get something more than a draft pick for a player of Contreras’ talent.

But Freddie Freeman’s departure from the Atlanta Braves in March could serve as a cautionary tale for Contreras, or any pending free agent for that matter. Pay attention to what your agent is doing.

His Cardinals hadn’t won a World Series since he was in preschool. And there was Jim Mielke, wedged into the front row of the Busch Stadium bleachers, his right leg dangling over the right-field wall. He watched Bruce ...Read More

After an entire season spent chasing their counterparts in the American League East without winning a multi-game series, the Sox put it all together for their best weekend of ...Read More

ANAHEIM, Calif. — The Twins will head home from SoCal having gone 1-4 on the West Coast, the final blow being a 4-2 loss to the Angels on Sunday.

The Twins' only victory of this past week was at Angel Stadium on Friday ...Read More

SAN FRANCISCO —The Giants’ best, maybe last, chance at a postseason push is off to a good start.

With a sweep of the Pirates, completed Sunday afternoon with a walk-off 8-7 win, the Giants did exactly what it will ...Read More

ARLINGTON, Texas — The Mariners' dominance over the Texas Rangers came to an end, well, at least for one game.

After losing their last nine games against Seattle and 10 of the last 12 meetings this season, the Rangers ...Read More