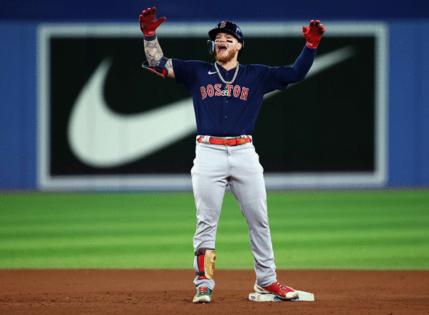 The Red Sox needed a pick-me-up in a big way on Wednesday night. Right now, there’s no one better to deliver on that than Alex Verdugo.

After suffering one of their toughest defeats of the season in Tuesday’s walk-off loss, the Red Sox nearly experienced some deja vu. But after losing a second consecutive late-inning lead, they persevered. Verdugo hit a big two-run double in the 10th to complete a four-RBI night, and Matt Strahm barely closed the deal to lift a beleaguered bullpen as the Red Sox avoided a sweep with a 6-5 victory over the Blue Jays at Rogers Centre.

It was far from easy.

The Red Sox led 6-3 after a three-run rally in the 10th when Strahm – who hadn’t pitched since Saturday and wasn’t used Tuesday as the bullpen melted down in the ninth – was asked to pitch a second inning to finish the job. He recorded two quick outs, then things got hairy.

It wouldn’t have been possible without Verdugo, who hit a go-ahead two-run homer in the sixth – his second go-ahead blast in the last week – to give the Red Sox a 3-2 lead. The Sox lost the lead in the eighth, when Ryan Brasier gave up an RBI double to Raimel Tapia.

But unlike Tuesday, they didn’t completely break. Brasier struck out Biggio to end the inning, and Strahm pitched a shutout ninth to send the game to extras. In the 10th, the Red Sox loaded the bases and took the lead when J.D. Martinez was hit by a pitch before Verdugo’s two-run double gave them insurance that was ultimately much-needed to hold on.

Other takeaways from Wednesday:

– Nick Pivetta pitched another quality start, and worked through some command issues and some tempers flaring in doing so.

With the game tied at 1 in the third inning, Pivetta inadvertently hit Alejandro Kirk with a pitch, which looked to certainly be by accident. But the Blue Jays took issue with it. Manager Charlie Montoyo walked out to check on Kirk, and Vladimir Guerrero Jr. had words for Pivetta, who jawed back at him as the benches cleared. But nothing happened beyond that.

When the dust settled, Pivetta issued a walk to Lourdes Gurriel to load the bases, but responded to strike out Raimel Tapia.

It was another impressive showing for Pivetta, who held one of the toughest lineups in baseball in check. Despite giving up a go-ahead homer in the fifth to George Springer – which was quickly canceled out by Verdugo’s blast – the right-hander pitched into seventh for a fourth consecutive start and fifth time in June, as he gave the Sox another chance to win.

– Franchy Cordero recorded his first career four-hit game as he continued to impress with one of his best overall performances with the Red Sox.

Cordero – who may have the most raw power on the Red Sox – jump started the offense by actually executing a perfect bunt past the shift down the third-base line, forcing Manoah to actually throw his glove at the ball. Cordero then stole second, advanced to third on a throwing error and scored on a Rob Refsnyder sac fly.

Cordero added a leadoff double in the seventh and another single in the ninth, which set up a big chance the Red Sox couldn’t capitalize on. His OPS is up to .748 this season.

©#Matt Chapman singled, then Santiago Espinal singled to score the extra-inning ghost runner, and after Cavan Biggio hit a double to right that scored another, he suddenly represented the winning run on second with the top of the Jays order coming up. But Strahm barreled down, and got George Springer to pop out as the Red Sox escaped. YR# MediaNews Group, Inc. Visit at bostonherald.com. Distributed by Tribune Content Agency, LLC.
blog comments powered by Disqus