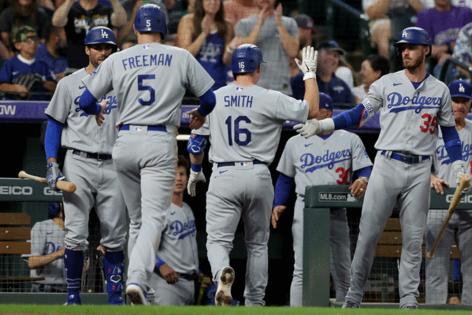 DENVER — The Dodgers checked in to Coors Field on Monday. They finally took advantage of its amenities on Wednesday.

Home runs by Freddie Freeman, Will Smith and Cody Bellinger highlighted an 11-hit night as the Dodgers beat the Colorado Rockies, 8-4, to avoid a three-game sweep in Denver.

The Dodgers were shut out on Monday and managed a total of just 12 hits while losing the first two games of the series. Add the season-opening series loss and the Dodgers had scored a total of 15 runs in losing four of their first five games at Coors Field this year.

The Dodgers got started early. Freeman, the second batter of the game, hit the first pitch he saw from Rockies starter German Marquez over the center-field wall for a solo home run.

They scored three more times in the second inning with Marquez walking two and giving up a two-run double to Trea Turner high off the screen in right-center field.

Marquez lasted into the fourth inning, giving up another run on an RBI single by Eddy Alvarez before exiting with a blister on his pitching hand.

Freeman led off the fifth inning with his second hit of the game, a single, and trotted home when Smith launched a 429-foot drive into the left-field seats.

As the Dodgers’ offense has swooned through June, it has been left to the trio at the top – Turner, Freeman and Smith – to do most of the heavy lifting.

Julio Urias has had a pretty good June as well, making his case for inclusion on the National League All-Star team.

Urias held the Rockies to one run in the first five innings Wednesday before stumbling in the sixth inning. In his five starts this month, Urias was 3-1 with a 2.20 ERA and 0.87 WHIP.