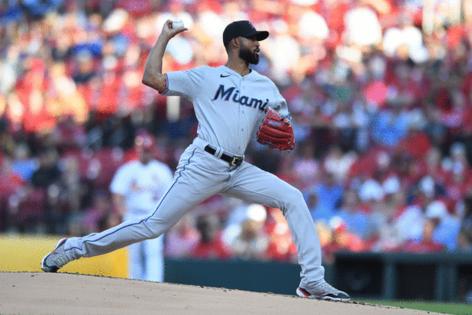 ST. LOUIS — It took until his fifth career start against them, but Sandy Alcantara finally got a win against his former team.

The Miami Marlins’ ace once again had a solid outing and Avisail Garcia gave him the final bit of run support Alcantara needed with a go-ahead two-run home run with two outs in the ninth inning for a 4-3 win over the St. Louis Cardinals at Busch Stadium.

Before this, though, the Marlins were winless in Alcantara’s first four starts against the Cardinals since Miami acquired him from St. Louis as the centerpiece from the Marcell Ozuna trade in December 2017.

And it generally hasn’t been because Alcantara has faltered in those starts. Alcantara had a 0.99 ERA (three earned runs over 27 1/3 innings) in those first four outings.

It was more of the same on Wednesday from Alcantara’s perspective, with the Marlins’ ace holding the Cardinals to three runs (two earned runs) on seven hits and two walks while striking out three over nine innings. It’s the 10th consecutive outing this season in which Alcantara has thrown at least seven innings, the ninth time in that span he has held his opponent to no more than two earned runs and his second complete game.

But the win almost wasn’t meant to be, with defensive miscues resulting in the Cardinals taking an early lead.

St. Louis opened scoring in the third on a Dylan Carlson sacrifice fly that scored Edmundo Sosa, who hit a leadoff single to the left side that was just out of third baseman Brian Anderson’s reach, stole second and got to third on a Garrett Cooper throwing error.

The Cardinals’ other two runs came in the fifth. St. Louis had runners on the corners and one out after Sosa hit a triple that Jesus Sanchez misplayed and an Andrew Knizner walk. Brendan Donovan then drove in Sosa with a sacrifice fly to left field that also advanced Knizner to second base when Bryan De La Cruz, who was a late addition to the lineup with Jorge Soler scratched due to back discomfort, threw home instead of to second base. A Carlson single through the right side then drove in Knizner for what was the go-ahead run at that time.

The Marlins scored their two runs Wednesday on a Jesus Aguilar RBI single in the fourth that scored Cooper and a Bryan De La Cruz double play with the bases loaded in the fifth.

St. Louis held the Marlins scoreless for the next three innings until Garcia sent a first-pitch four-seam fastball from Ryan Helsley to straightaway center field for a two-run home run.

Alcantara made his way back to the mound for a scoreless ninth to seal his victory.

And it was a relieving victory, considering how Alcantara’s previous four career starts against the Cardinals unfolded:

— April 20: Alcantara threw eight shutout innings, giving up just four hits and one walk while striking out six to earn a no-decision. Miami lost 2-0 when Nolan Arenado hit a two-run home run off Anthony Bender in the ninth.

— June 16, 2021: Alcantara gave up one unearned run over 8 1/3 innings. The one run: A walk-off single to Yadier Molina in a 1-0 defeat at Busch Stadium, his only other time pitching in St. Louis since the trade before Wednesday.

— April 6, 2021: Alcantara gave up three runs (two earned) while allowing four hits and two walks and striking out 10 over six innings in a 4-2 loss. All three runs against him came in his final inning on a passed ball, RBI groundout and sacrifice fly.

— June 10, 2019: Alcantara allowed four runs (one earned) over five innings on four hits and four walks while striking out six. The Marlins lost that game 4-1.