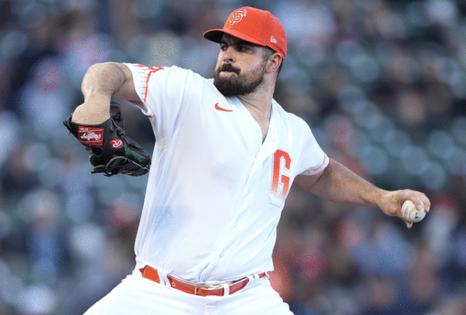 In a rare interleague matchup, the Giants beat the Tigers 4-3, in the clubs’ first game since 2017 and their first meeting at Oracle Park since the Giants’ sweep to claim the 2012 World Series.

Since climbing a season-high 10 games over .500 last Saturday, the Giants had dropped six of their past eight and four of five entering Tuesday night. After a sloppy series loss to the National League-worst Reds on Sunday, manager Gabe Kapler said there was “work to be done” on their off day Monday before the start of this series.

Although it required a four-out save from closer Camilo Doval after a late rally against the Giants’ bullpen, San Francisco became the 13th team to reach the 40-win mark this season with 18 more to play until the All-Star break.

Rodón continued to polish his All-Star resume with six more strong innings Tuesday night. It took a two-out rally in his final inning — the sixth — for the Tigers to score their first and only run off San Francisco’s starter, who has allowed two total over his past 28 innings.

Absent his usual swing-and-miss stuff, Rodón mowed through Detroit’s lineup with efficiency. He left the game with 86 pitches, after needing 25 to make it through his final frame. His four strikeouts were his fewest in five June starts — during which his 1.25 ERA ranks third in MLB — but Riley Greene’s two-out double in the fourth was the Tigers’ only runner to reach scoring position until Robbie Grossman’s double in the sixth.

Grossman advanced to third on a wild pitch and scored the Tigers’ only run of the game on a shift-beating single into right field from Miguel Cabrera. The Tigers rallied for runs in the seventh and eighth off relievers John Brebbia and Dominic Leone, prompting Kapler to call on Doval with to record the final four outs, escaping a bases-loaded jam in the eighth with a strikeout of Jonathan Schoop.

Rodón has three more scheduled starts before the All-Star break, but right now owns the seventh-best ERA among NL starters (2.63) and the third-most strikeouts (105). His start Tuesday night was his 12th of at least five innings and two or fewer runs, the most in MLB. Rotation partner Logan Webb is also making a strong case, with a 3.04 ERA (13th in NL).

The Giants got their runs on a pair of two-out base knocks from one of their hottest and one of their coldest hitters. Neither ball left the bat harder than 80 mph nor traveled further than 263 feet, but each ball found grass through two strong examples of situational hitting.

After Joc Pederson poked a double through the hole in the shift and into left field, giving the Giants runners at second and third with two outs in the first, Evan Longoria drove them both home for the first runs of the game by lofting a change-up off the plate in front of Greene in center field.

In the fifth, Mike Yastrzemski did just enough with a 2-2 splitter to poke a ball into almost the same location that drove in Longoria and Ruf, who advanced into scoring position on a wild pitch from Tigers starter Tarik Skubal.

Longoria, who reached base two more times, extended his on-base streak to eight games. He has 10 hits in his past 26 at-bats, including two home runs last series against Cincinnati, and has risen his OPS nearly 100 points, from .712 to .811, over the course of the streak.

Yastrzemski added to his nice night with a couple of plays in right field that reminded fans why he was a Gold Glove finalist last year, making amends for a difficult defensive week for the outfield while dropping four of five on their recent skid.

Yastrzemski robbed Cabrera of extra bases by fully extending his body to make a leaping grab for the second out in the eighth. And leading off the fourth inning, Javier Baez looked destined for two bases when he lined some of the Tigers’ best contact all game against Rodón off the brick wall in right field. But Yastrzemski masterfully played the ball off the wall and fired a bullet to Thairo Estrada, who laid the tag on Baez at second base.

Rodón celebrated appropriately, signaling to his right fielder and sticking his finger guns back in their imaginary holster.

After an entire season spent chasing their counterparts in the American League East without winning a multi-game series, the Sox put it all together for their best weekend of ...Read More

ANAHEIM, Calif. — The Twins will head home from SoCal having gone 1-4 on the West Coast, the final blow being a 4-2 loss to the Angels on Sunday.

The Twins' only victory of this past week was at Angel Stadium on Friday ...Read More

SAN FRANCISCO —The Giants’ best, maybe last, chance at a postseason push is off to a good start.

With a sweep of the Pirates, completed Sunday afternoon with a walk-off 8-7 win, the Giants did exactly what it will ...Read More

ARLINGTON, Texas — The Mariners' dominance over the Texas Rangers came to an end, well, at least for one game.

After losing their last nine games against Seattle and 10 of the last 12 meetings this season, the Rangers ...Read More

DENVER — The Rockies were late to the party Sunday afternoon and it cost them.

By the time they put on their hitting shoes in the sixth inning, they trailed Arizona 7-0. The Rockies rallied, but came up short, falling ...Read More