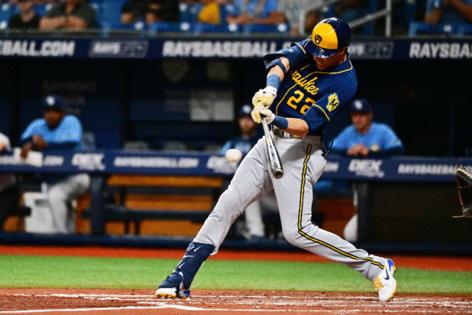 ST. PETERSBURG, Fla. — Rookie Shane Baz did his part Tuesday, working impressively into the sixth inning as his pitch count climbed into the mid-90s, keeping the Brewers off the board in protecting a one-run lead.

Rays manager Kevin Cash jogged to the mound to make a change with one on and two out. He had a rested bullpen to work with and picked one of his most effective relievers of late in Matt Wisler, who hadn’t allowed a run in 11 of his last 12 outings and just three hits over his last nine.

Then, in a span of eight pitches, it all went terribly wrong.

Wisler allowed a homer to Andrew McCutchen, a two-run shot that put the Brewers ahead 2-1, on an 0-1 slider. Then a double to Kolten Wong on a 1-2 slider. And then another two-run homer to Luis Arias on a first-pitch slider.

The loss ended a modest three-game winning streak for the Rays (40-33). It also got them off to a bad start on a stretch of 10 games in nine days, with a doubleheader Saturday in Toronto and 20 in 20 leading up to the All-Star break.

Getting the one run was a battle, as Brewers starter Brandon Woodruff, just off the injured list after an ankle issue and a bout of finger numbness, set down the first nine Rays in order, seven on strikeouts.

But the Rays broke through in the fourth. Well, at least with a hit, as Yandy Diaz laced a ground ball to center and hustled to second for a leadoff double. They then got a run, as Randy Arozarena singled with two outs to score Diaz, who had moved up on an infield out.

The Rays got two more in the eighth. Brett Phillips and Yandy Diaz drew walks from reliever Jason Alexander, moved up on a passed ball and scored on two outs, a sacrifice fly by Wander Franco and an infield bouncer by Harold Ramirez.