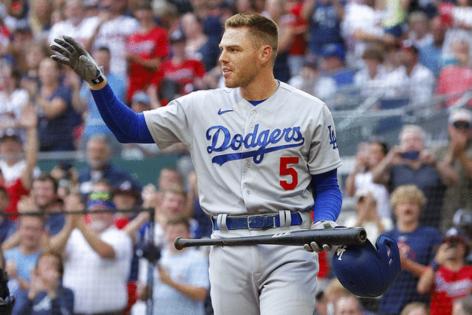 DENVER — Freddie Freeman has reportedly filed paperwork to terminate his relationship with his longtime agents at Excel Sports Management, saying in a statement his "representation remains a fluid situation" barely three months after he signed a six-year, $162 million contract with the Dodgers.

According to a person with knowledge of the situation who wasn't authorized to speak on the record, the MLB Players Association sent an email to all agents asking them not to contact Freeman, a procedure that typically takes place after a player changes representation.

In his statement, which was provided to MLB.com, Freeman said he is "working through some issues with my longtime agents at Excel" and that he will "update [the situation] if needed."

The move served as the latest sign that Freeman was seemingly unhappy with the way his free agency unfolded before the season, when the longtime Atlanta Braves star failed to strike a new contract with his old team despite his publicly stated desire to remain in Atlanta.

Entering the offseason, the industry expectation was that Freeman would re-sign with the Braves. Even the Dodgers, who quietly courted him before MLB's 99-day lockout, weren't initially optimistic of luring the former most valuable player away.

But when free agency resumed following the lockout's end in March, negotiations between the Braves and Freeman's camp quickly fell apart.

The two sides failed to find middle ground. And two days later, the Braves acquired All-Star first baseman Matt Olson from the Oakland Athletics, effectively eliminating any chance of Freeman returning to the only club for which he'd ever played.

After signing with the Dodgers on March 16 — in a deal that included $57 million in deferred payments, giving it a present-day value of just over $148 million — Freeman voiced displeasure with the Braves during his introductory news conference with the Dodgers.

ST. LOUIS — Bob Forsch would have been smiling. The last Cardinals pitcher to author a no-hitter in St. Louis was not on hand Saturday night at Busch Stadium to witness potential history, having died in 2011.

CHICAGO — Riley Greene talked before Saturday's game about getting back to his smooth, natural swing. He felt like he’d been trying to do too much, getting outside of himself, not letting the game just come to him.

MIAMI — The Miami Marlins lost both games of their doubleheader against the Atlanta Braves on Saturday at loanDepot park, falling 5-2 in the first game and 6-2 in the nightcap.

With that, Miami’s scoring woes have ...Read More

KANSAS CITY, Mo. — Everything about this season so far has pointed to the Los Angeles Dodgers being a special team. Well, the Kansas City Royals got an up-close view of just how overwhelming the Dodgers can be when they�...Read More

WASHINGTON — Now back to worrying about winning baseball games.

The shock hasn’t necessarily worn off, but baseball comes at its participants fast.

So a day after being rocked by news of Fernando Tatis Jr.’s PED ...Read More

ARLINGTON, Texas — After losing their last nine games against them and 10 of the 12 meetings this season, the Texas Rangers finally found a way to beat the Seattle Mariners, prevailing, 7-4.

But in an uncharacteristical...Read More