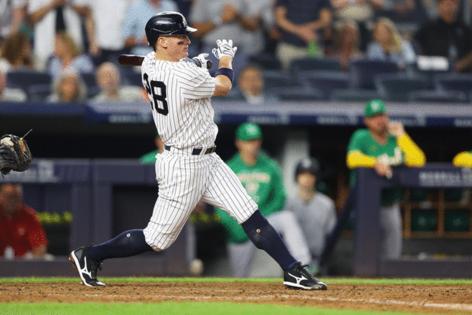 NEW YORK — There may not have been the crowds chanting heatedly at the opponents. It was a Monday night and the Yankees got off to a slow start against the team with the worst record in baseball, but there was no let down at the Stadium.

The Bombers rallied with a six-run seventh inning in the series-opener to beat the A’s 9-5.

The Yankees (54-20) have won two games in a row after losing two over the weekend to the Astros. It was their major-league leading 23rd come-from-behind win and their second in as many days. They maintained the best record in baseball, while the A’s (25-50) became the first team in the majors to lose 50 games this season.

The Yankees really should thank A’s catcher Sean Murphy for getting that seventh inning rally going. It began with DJ LeMahieu’s second walk of the night, but Aaron Judge reached on a catcher’s interference. A.J. Puk hit Anthony Rizzo to load the bases. Murphy then got his glove in the way of Giancarlo Stanton to bring in the first run of the inning.

Josh Donaldson took it from there with a two-run double that gave the Yankees their first lead since the third inning. Jose Trevino doubled off the left-field wall to drive in two more runs. The catcher is 12--for-33 with 16 RBI with runners in scoring position this season. Marwin Gonzalez, playing as Isiah Kiner-Falefa nurses a bruised finger and Gleyber Torres is waiting out a cortisone shot in his right wrist, singled in Trevino.

When the dust settled on the seventh, after Joey Gallo popped out to the catcher, the Yankees had brought 10 hitters to the plate and scored six runs.

This was supposed to be the breather. The Yankees entered this stretch of 20 games in 20 straight days back on the 14th with 13 straight games against teams that are vying for playoff spots. They faced the Rays six times and the Blue Jays for three, before an intense four-game series against the Astros. “And part of the stretch we get in at 5am on that Thursday, play that night game, night game, day game days, so it’s been a physically grueling stretch,” Boone said. “And then I think you had the intensity of the weekend with a great opponent. All the eyeballs on that. Yeah, and right adds a little bit too.”

The Bombers went 9-4 in that stretch.

“I mean, knowing walking into this stretch you know it’s going to be challenging, and I think it’s great that we’ve played well through it, and kind of certainly held our own through it,” Boone said. “So that’s been good to see and, but we also understand it’s June and there’s a long way to go on this and there’s gonna be other tough stretches.

“Just kind of keep your head down as best we can.”

The Yankees had to try and avoid a let up with Oakland, who came into the Stadium in last place in the American League West and 21 games behind the Astros.

Jordan Montgomery got in trouble in the third inning as he flipped over the lineup. After striking out the first two batters he faced, he gave up a single to Christian Bethancourt and it began to unravel. Ramon Laureano doubled off the top of the wall to score the A’s first run. Elvis Andrus doubled to drive in three runs and Sheldon Neuse singled in Andrus.

Montgomery allowed all five runs charged to him in the third. The A’s had six hits off him and a walk. He struck out six over 6.2 innings of work.

The lefty had been handed a 1-0 lead after Rizzo hit his 20th home run of the season in the first inning. Stanton hammered his 18th of the season in the fourth. His last five hits have all been for home runs. Judge drove in the Yankees’ third run in the fifth, driving in LeMahieu, who had walked and stole second, on a single.