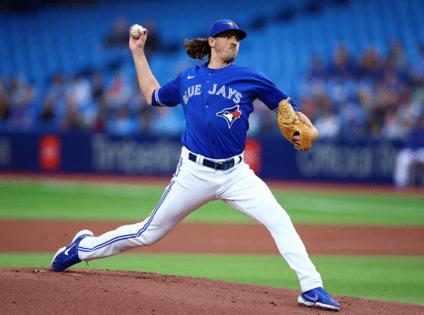 In their seven-game winning streak, the starting pitcher had earned the win in all seven games, the first time that’s happened by a Red Sox team since a stretch in 2011.

In need of a starting pitcher to fill a hole in the rotation against the Blue Jays on Monday night, the Sox didn’t get what they needed.

Connor Seabold, who has been dominating hitters in Triple-A this year, was called up to make the spot start and got knocked around for seven runs in 4 2/3 innings as the Blue Jays steamrolled the Red Sox, 7-2.

1. Blue Jays have the Sox number

Monday’s loss snapped the Sox’ seven-game winning streak, which tied their season-long. They also had a seven-game streak from June 5 through June 12.

It’s concerning given the Blue Jays have handled the Red Sox with ease all season. They’re 6-2 against the Sox and have the distinct advantage of using all their players for home games in Toronto, while the Sox have been without multiple players in both their trips to Canada this year. Kutter Crawford, who might’ve been the choice over Seabold, is back in the minors but has been unvaccinated against COVID-19. The Sox are also without closer Tanner Houck and leadoff hitter Jarren Duran, who are both unvaccinated.

To lose key players before the series begins has to be a thorn in their side. The Jays don’t need any help.

The Red Sox have handled some mediocre teams over the two months, going 33-17 in their last 50 games leading into Monday. But just five of those games were against American League East teams.