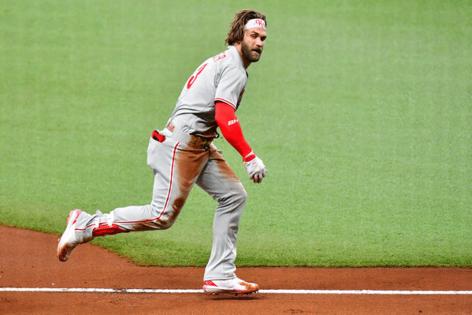 SAN DIEGO — Blake Snell was so much better, and then he reverted to being the guy who has struggled through the first half of both his seasons with the San Diego Padres.

The left-hander threw strikes and generally made quick work of Philadelphia Phillies batters for four innings before hitting a familiar bump.

The Phillies scored three times in the fifth inning and once more in the fifth against Snell, and the Padres couldn’t keep up in a 4-2 loss Saturday night at Petco Park.

Jorge Alfaro’s two-run double in the bottom of the fifth for the Padres cut the deficit to 3-2, but they made 13 straight outs to finish the game.

The Padres have lost all seven of Snell’s starts, and he fell to 0-5.

Snell has known for some time the primary reason he took a 5.46 ERA and 1.45 WHIP into Saturday.

“I just need to dominate the zone,” he has said many times.

He threw strikes just 60% of the time in his first six starts. And while his arsenal of pitches is good enough that he can safely pitch in the strike zone, he was doing that just 36% of the time. Both numbers are below the MLB average.

One significant aberration was the 97 mph fastball that fractured Bryce Harper’s left thumb in the fourth inning. Harper turned to scream at Snell as he walked off the field.

Snell ended that inning with a double play before going off course in the fifth.

J.T. Realmuto led off the fifth with a home run, and the Phillies added two more runs on a double, two singles and a groundout.

Before Snell departed with two outs in the sixth, the Phillies added on with a walk by Realmuto and Alec Bohm’s double.