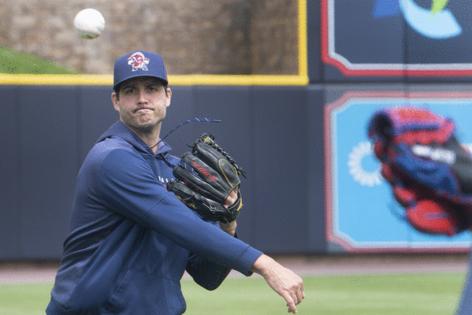 PHILADELPHIA — Mark Appel’s wait is over.

Nine years after being drafted first overall, four years after taking a leave from baseball, Appel got called up by the Phillies late Friday night to replace reliever Connor Brogdon, who was placed on the COVID-19 list, interim manager Rob Thomson announced after a 1-0 loss to the Padres.

”Completely overwhelmed,” Appel said, via Twitter. “I have so many thoughts I want to share but can’t find the words, so I’ll just say this: I’m thankful. Today, I get to play a game I love as a Major League Baseball player. LET’S GOOOOO @PHILLIES!!!!”

Losing Brogdon, even for a few days, will be a blow to a bullpen that isn’t deep with trustworthy late-inning options. After a poor start and a mid-April demotion to Triple-A, Brogdon has allowed two runs in 15 2/3 innings over his last 16 appearances for a 1.15 ERA.

Appel, 30, joins the team Saturday in San Diego. The right-hander has a 1.61 ERA, 24 strikeouts and eight walks in 28 innings in 19 appearances for Triple-A Lehigh Valley.

But until he got the call from the Phillies, Appel was one of three No. 1 overall picks in baseball history (not counting recent years) not to reach the big leagues, a club that included Brien Taylor (1991) and Steven Chilcott (1966).

Appel’s story has been thoroughly chronicled. Injuries and the burden of expectations of being selected first overall by the Houston Astros and signing for $6.35 million in 2013 caused him to step back from baseball in January 2018. He had bone spurs in his elbow, which led to shoulder inflammation and surgery later that year, and sat out three seasons.

The Phillies acquired Appel in December 2015 in a seven-player trade for closer Ken Giles that also netted Vince Velasquez. They maintained Appel’s rights during his hiatus. He quietly resumed throwing in 2019 at Driveline Baseball in Seattle and worked with Bill Hezel, a Phillies pitching consultant.

When Appel felt physically and mentally ready to return to the game, he spoke with Phillies assistant general manager Ned Rice. He returned to the field last year and posted a 6.06 ERA between Double-A Reading and Lehigh Valley.

“I know I wouldn’t be able to be here if I hadn’t been able to have a good signing bonus,” Appel said last year. “Because going 3 1/2 years without much of a salary and doing all the rehab and investing money in your health, a lot of guys don’t have that luxury.”

It’s unclear where Appel will slot into the bullpen pecking order for as long as he’s there. But given his unique journey, that’s likely secondary to simply making it to the majors at long last.