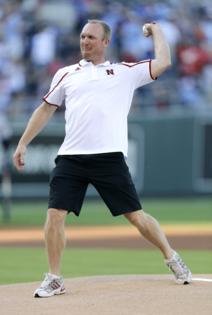 LOS ANGELES — Even with the almost supernatural intervention of Shohei Ohtani, the Angels were very nearly swept this week by the Kansas City Royals. The Royals are not a good team. The Angels might not be, either. As of Thursday, Baseball Prospectus projects them with a one in 10 chance of making the new and expanded playoffs.

If the Angels do not make the playoffs, they could launch a broad search for someone to replace interim manager Phil Nevin. Their best choice might well have been in the house on Wednesday, when the Angels celebrated the 20th anniversary of their one and only World Series championship.

The Angels should not consider Darin Erstad because he is a link to their past glory, the All-Star center fielder who caught the ball that clinched the championship. They should consider him because he is a born leader, a manager of the year in waiting.

Andrew Friedman has hired two managers. With the Tampa Bay Rays, he hired Joe Maddon for his first major league managerial job. Maddon is a three-time manager of the year.

In 2015, with the Dodgers, Friedman hired Dave Roberts for his first managerial job. Roberts has been honored as manager of the year. Same for the runner-up to Roberts, Gabe Kapler, with the San Francisco Giants.

The third finalist for the Dodgers' job would have been Erstad, until he withdrew from consideration. Friedman had not known Erstad well, but Maddon had recommended him.

"I wasn't sure what to expect when we went through the process," Friedman said Wednesday. "But, after the first interview, he blew us away.

"We just felt like the leadership qualities were off the charts. He was very thoughtful about how he sees the game."

The Dodgers ran Erstad through several simulations, learning how he might establish and maintain expectations, manage personality conflicts, and communicate with his players. They would have been comfortable introducing Erstad into a clubhouse with Chase Utley and Yasiel Puig.

"He had a chance to be a really strong leader," Friedman said.