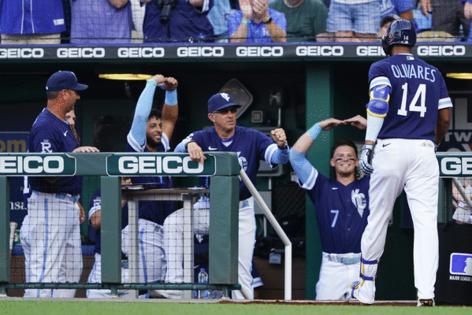 KANSAS CITY, Mo. — Edward Olivares — it appears — does not want to return to Omaha.

And really, who could blame him?

The Kansas City outfielder — optioned back to Triple-A Omaha eight separate times during the season a year ago while caught up in Royals roster crunches — emphatically made his case to stick with the big league team for the rest of 2022 on Friday night.

In his first game back from a quad injury that had shelved him for six weeks (and after finishing off a rehab stint in Omaha, of course), Olivares blasted no-doubt homers in his first two at-bats, pacing the Royals’ offense in a 3-1 home victory over the Oakland A’s at Kauffman Stadium.

It was one of two welcome returns for the Royals on Friday night.

Zack Greinke — he came back from a flexor strain that first sidelined him in late May — was sharp while tossing six innings of one-run ball. He struck out four and walked none, relying heavily on a previously seldom-used pitch: his cutter.

Greinke threw 17 cut fastballs on Friday night according to Statcast, which was his highest total of the season and also the most of any Royals pitcher in a game this season. KC pitchers, in general, tend to not throw the offering; the team had thrown just 84 combined cutters in 68 games before Friday, by far the lowest output in the majors.

Carlos Santana continued his recent hot stretch with the Royals’ other RBI, while Dylan Coleman, Jose Cuas and Scott Barlow each chipped in a scoreless inning as the Royals won in front of 25,077 fans.

Meanwhile, Olivares’ home runs — both toward the Royals Hall of Fame in left field — were blasts. His first sailed 430 feet, while the second traveled 411; he bat-flipped both times after contact after knowing he’d gotten enough.

The round-trippers were Olivares’ first two this season. In his first 15 games before the injury, he’d hit .371 with nine singles and four doubles but no homers.

The Royals (26-43) will need just one victory over the weekend to secure their third consecutive series win; KC took 2 of 3 from both Oakland and the LA Angels on its most recent road trip.