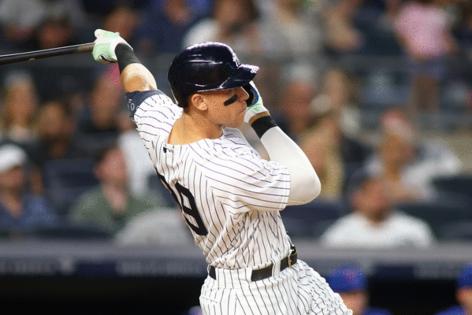 NEW YORK — Before actually engaging in an arbitration hearing, which was scheduled to begin at noon on Friday, Aaron Judge and the Yankees settled on a contract agreement. Judge will make $19 million this season, with an additional $250,000 if he wins American League MVP, and another $250,000 bonus if he brings home the 2022 World Series MVP.

The $19 million settlement, which allowed the sides to avoid their arbitration hearing, is a significant raise from the $8.5 million he earned in 2020 and the $10.1 million figure he brought in last year. The $19 million is also a midpoint between the proposal from Judge’s camp ($21 million) and the one the team would have brought to the arbitrator ($17 million), according to multiple sources. Had the hearing actually occurred, the arbitrator would have had to decide between one of those numbers, as the system does not allow for compromises like that.

This is the final season of Judge’s arbitration eligibility. He is set to hit the free-agent market for the first time after this season, and the larger-than-life player will get one of the biggest paydays in MLB history. Prior to the season, Judge turned down the Yankees’ seven-year, $213.5 million contract extension. Had the Yankees gotten their way and paid him $17 million this year, that total contract would have paid him roughly $33 million per year through his age-36 season. Judge is rumored to be asking for $36 million per year.

Instead, Judge turned that down and chose to bet on himself, something that looks like a better and better decision with each game. Judge is on a trajectory to win the MVP, clock 60 home runs, and potentially lead the Yankees to their first championship since 2009. If he accomplishes all that, he will essentially get a blank check, as his value will skyrocket tremendously. Paired with Aaron Boone’s tendency to play him in center field this year rather than Judge’s usual, less important spot in right field, and No. 99 has become even more valuable on the field.

Judge’s 2022 production is well-timed as far as boosting his free-agency value, but it would not have been considered in the arbitration case. This also all would have been settled much earlier if not for the MLB lockout, which forced several hearings to happen during the season. With Judge’s salary being determined, no more players from the 2021-22 arbitration class need to settle their disputes.