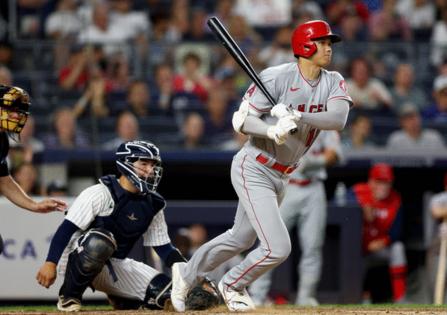 PITTSBURGH — In a sport where the numbers often become numbing — I can look up the Pirates' record on Tuesday nights on artificial turf against 27-year-old left-handers with mustaches who played for at least two American League teams — this little nugget leaped from the computer screen. It came courtesy of ESPN Stats & Info:

"Shohei Ohtani is the 1st MLB player with both an 8-RBI game and a 13-strikeout game in a career. He's done it in the last 2 nights."

He's done it in the last 2 nights.

I'm always up for a good baseball argument, but if the topic is "greatest player of all time," there is no argument. There is only one answer, and it's not Babe Ruth.

Shohei Ohtani is the greatest baseball player who has ever lived. Period. I'm not talking lifetime achievement stuff here. I'm asking a simple question: If you plucked any player out of his prime, who would you consider the best?

Well, sure, those guys could do just about everything. Mays averaged 40 home runs for 12 years straight, ran like an Olympic sprinter and played center field like a Greek god. I don't have to tell you about everything Bonds did.

Here's the thing, though: Neither of those guys WAS ALSO A PITCHER, let alone an elite one. That's kind of an important detail. Ohtani hit 46 home runs last season, has a great chance to hit 40 again, and strikes out more batters per nine innings than all but two starting pitchers in baseball.

He's also an elite pitcher is the key phrase there. It's almost too much to comprehend.

OK, if we're talking pitching, how about Walter Johnson? I mean, 417 wins, 3,509 strikeouts and 110 shutouts is pretty good. (Wait, 110 shutouts? Was he facing the 2021 Pirates every night?) Johnson was a far better pitcher than Ohtani will ever be.

Here's the thing, though: HE WASN'T ALSO A HITTER, let alone an elite power hitter. I'm pretty sure 'ol Walt never had an eight-RBI game or hit a 114-mph home run, which Ohtani did on the same night Wednesday.

Ohtani basically is playing two sports at once. He does all the prep work required of a pitcher and a hitter, then somehow thrives at both. As a pitcher for the chronically underachieving Los Angeles Angels, who recently fired manager Joe Maddon (I heard it was Plantar fasciitis), Ohtani is 6-4 with a 2.90 earned-run average and 90 strikeouts in 68 1/3 innings. He hit 100 mph or better on seven fastballs in a game against the Rangers. As a hitter, he ranks in the top 10 in the American League in home runs (15) and RBIs (45).

All of which brings us back to the only man in baseball history who did anything like what Ohtani is doing, and that would be Ruth, who had 94 wins as a pitcher and 714 home runs as a hitter. Here's the thing, though: He did both full time in just one season — 1919 — when he went 9-5 with 2.97 earned-run average and hit .322 with 29 home runs. Ohtani was better last season and could be again this season. Plus, Ruth wasn't playing against an entire world of baseball players.

It has reached the point where I'm waiting for the next amazing Ohtani nugget every night, like this one from early last season, foreshadowing Ohtani's MVP campaign: "Ohtani hit 100.6 mph with a fastball in the first inning, and a 451-foot homer on the first pitch he saw as the Angels' No. 2 hitter."

As Pirates manager Derek Shelton said during an interview with 93.7 The Fan, "We're going to talk about this guy for hundreds of years as transforming the game."