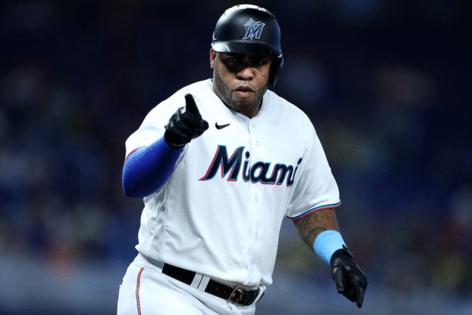 MIAMI — The Miami Marlins needed a late rally if they wanted to start their homestand with a series sweep against the Colorado Rockies.

They got it in the eighth inning. A three-batter stretch with one out in the frame gave the Marlins the go-ahead run in their 3-2 win over the Rockies on Thursday at loanDepot park. Miami won the first two games of the series 9-8 on Tuesday and 7-4 on Wednesday and is now 32-36 on the season. The Rockies fell to 30-40.

Garrett Cooper started the eighth-inning rally with a one-out single through the left side. He was replaced by pinch-runner Luke Williams, who went from first base to third on a Jesus Aguilar single to right field. Avisail Garcia then hit a ground ball to the left side that could have been a potential inning-ending double play, but the outfielder beat the throw to first for a go-ahead RBI fielder’s choice to score Williams.

The Marlins scored their first two runs of the game on a Miguel Rojas RBI single in the second inning that scored Aguilar and a Jorge Soler sacrifice fly that scored Jon Berti in the third.

Braxton Garrett held the Rockies to two runs (one earned run) over 4 2/3 innings despite allowing 10 baserunners on nine hits and a walk. He struck out seven. Both runs came in the third inning on a Brendan Rodgers RBI double to center field that scored C.J. Cron. A Ryan McMahon single one at-bat later then scored Rodgers, who had reached third on a Rojas throwing error as part of a relay in an attempt to get Cron out at home plate.

Zach Pop, who was recalled to the active roster Thursday after Louis Head went on the 15-day injured list with a left shoulder impingement, followed with 1 1/3 scoreless innings. Anthony Bass threw a scoreless seventh and Steven Okert a scoreless eighth before Tanner Scott recorded his seventh save of the season with a scoreless ninth.