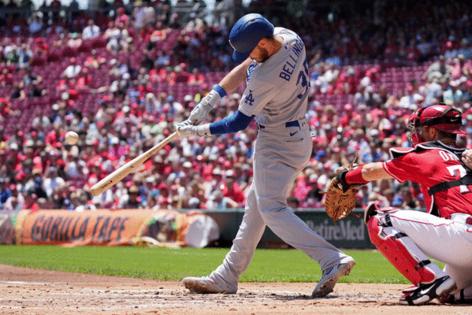 CINCINNATI — The Queen City is not known for its hot springs, mineral baths or restorative cures – unless you have deep, unfounded faith in the healing powers of Skyline chili. But a three-day visit was very therapeutic for the Dodgers’ hitters.

The Dodgers hit a season-high five home runs – one each from Freddie Freeman, Cody Bellinger, Max Muncy, Trayce Thompson and Will Smith – as they completed a three-game sweep of the Cincinnati Reds with a 10-5 victory Thursday afternoon at Great American Ball Park.

The Dodgers scored 26 runs in the three-game series after averaging just 3 ½ runs per game through their first 16 games this month. Through Sunday, only the Angels and Tigers had scored fewer runs this month than the Dodgers, who were batting .234 and struggling mightily in clutch situations.

Three days facing the Reds’ pitching staff – last in the majors in ERA – did wonders for that.

The Dodgers batted .375 (42 for 112) in the series with nine doubles, a triple and seven home runs – inflating the Reds’ MLB-leading total to 63 allowed at home this season.

But the curative qualities of the Ohio River also touched some needy teammates.

Muncy, Bellinger and Justin Turner – the three most underperforming hitters in the Dodgers’ lineup – went a combined 9 for 13, each with three hits.

Muncy had his first home run, first extra-base hit and first RBI since Tony La Russa’s motivational skills spurred him two weeks ago. It was the first time this season Muncy and Turner even had multi-hit games in the same game.

That smorgasbord of offense made it easy to ignore some baserunning misadventures. The Dodgers had a runner thrown out on the bases in each of the first three innings.

Trea Turner was sliding into second base on a steal attempt when Reds left fielder Tommy Pham caught a first-inning fly ball. He was doubled up. Justin Turner was tagging up and heading to third on Bellinger’s second-inning sacrifice fly when the ball was cut off. He was tagged out. And Austin Barnes was thrown out by Pham trying to go from first to third on a Trea Turner single in the third.

There were no mishaps running out their five home runs.

Clayton Kershaw went six innings for the first time since returning from his back injury. He allowed a season-high seven hits but worked around the traffic, allowing just one run while striking out seven.

Phil Bickford briefly made it close in the seventh, retiring just two of the six batters he faced. The other four scored, including three on a home run by Pham.