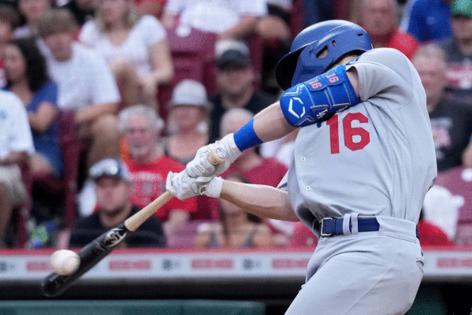 CINCINNATI — As Freddie Freeman hit just four home runs in his first 260 plate appearances this season, he would tell you it didn’t worry him — and then recite the exit velocities and launch angles of the fly balls he felt deserved a better fate.

One-oh-eight and 22 were enough Wednesday night. Freeman led off the seventh inning with his third home run in 41 plate appearances, breaking a tie and the Dodgers went on to beat the Cincinnati Reds, 8-4.

Freeman also drove in a run with a single and has seven RBIs in the first two games of this series. He is 13 for his past 34 (.382) and batting .338 (22 for 65) over his past 16 games, doing what he can to lift the Dodgers’ Mookie Betts-less offense from its early June slump.

The Dodgers had to dig out of a 3-0 hole against the Reds thanks to a replay review — and their own mistakes.

Albert Almora Jr. bounced a ground ball to third baseman Max Muncy and the Dodgers appeared to turn an inning-ending double play. But the Reds challenged the call at first base and it was overturned, putting runners at the corners with two outs.

Shortstop Trea Turner made a diving stop of Aramis Garcia’s ground ball to his left but his throw to first base was in the dirt and got past Freeman. A run scored on that play and another on a wild pitch by Anderson.

The Dodgers chipped away at the Reds’ lead with a run on Will Smith’s RBI single in the third then took the lead with a three-run fifth inning against Reds starter Luis Castillo.

Gavin Lux led off that inning with a liner through the middle then stretched it into a double. He moved to third on a ground out and scored on Freeman’s RBI single.

Smith kept it going with another single — part of a three-hit game that made him 20 for 59 (.339) over his past 15 games. Fast approaching 100 pitches, Castillo walked Max Muncy to load the bases then hit Chris Taylor with a pitch to force in the tying run. A sacrifice fly by Justin Turner gave the Dodgers a brief lead.

The Reds tied the score at 4-4 when Almora led off the bottom of the fifth with a home run.

They were set to take the lead later that inning when they put runners at second and third with one out. Tommy Pham lofted a fly ball to left field and Jonathan India tagged at third. But Taylor’s one-hop throw was waiting for him at home plate, cutting off the run and ending the inning.

Reds lefty Ross Detwiler retired the Dodgers in order in the sixth and manager David Bell left him in to face Freeman to start the seventh. That idea looked sound until Freeman drove a 2-and-2 sinker from Detwiler into the seats.

The Dodgers pulled away with three runs in the eighth including two on Trayce Thompson’s double — his first RBIs for the Dodgers since July 2017.

It was July 3, too soon by any reasonable measure for scoreboard watching. But it was also Sunday Night Baseball, the last game of the day, so the opportunity facing the Phillies was hard to miss.

The Chicago Cubs owners have spent the last decade-plus trying to emulate the Boston Red Sox.

Whether it was hiring Theo Epstein as president of baseball operations, renovating Wrigley Field the same way as Fenway Park, ...Read More

The Padres, and Dodgers for that matter, learned something about rookie starter MacKenzie Gore on Sunday. Because of it, Gore undoubtedly learned a whole lot about himself.

SAN FRANCISCO — Last Thursday, after three one-run losses to the surging defending champions, the Giants boarded their charter flight home from Atlanta in need of a fresh start. One player remarked about the cleansing ...Read More

BOSTON — The Red Sox continued to struggle against one of the worst pitching staffs in baseball, lost Xander Bogaerts to an injury and blew another late lead.

On a day when several things could have ...Read More

SEATTLE — Robbie Ray and Julio Rodriguez helped make sure the Mariners would head into the second half of their season on a roll.

Ray was dominant on the mound and Rodriguez provided the offense, propelling the Mariners...Read More