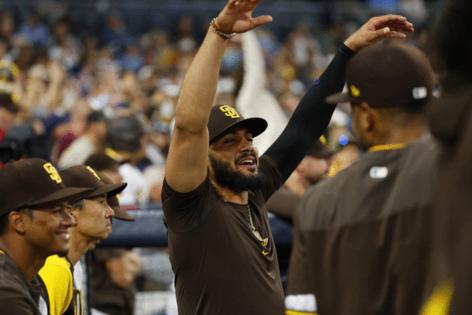 Fernando Tatis Jr. is in a place of flux.

There is progress. There is also more patience required for a 23-year-old who has acknowledged that is not a strong suit.

Padres President of Baseball Operations A.J. Preller said last week the evaluation of Tatis had evolved form "month to month" to "week to week." In a way, it is day to day.

"Sort of," Tatis said Wednesday morning. "That's where we are this week. There's a lot of tests we're trying and let's see how it goes."

He tries something new, sees how it feels and reports to the medical staff.

"Too many opinions," he said the other day, bowing his head and laughing.

He acknowledged a couple weeks ago he had been grabbing a bat and taking some swings "in the shadows" for a while. He said Tuesday he first picked up a bat in April.

After each new step — such as his swinging off a tee for the first time Tuesday afternoon — there are discussions among the medical staff and baseball operations groups about what the next step should be and when it should be taken.

"Right now we're in a period where we're trying to find out how he feels," manager Bob Melvin said Wednesday. "… We're just trying to take stock of where he's at. We're not pushing anything. But we're in a period here where something could change from day to day or week to week. We want to just know how he's feeling. So I think that's what was part of what you saw yesterday."

What was seen yesterday was video taken by fans from the restaurant adjacent to the Padres' batting cage.

Tatis has been taking dry swings for "a few days," according to team officials. In one video, Tatis was shown swinging on a tee. The situation is fluid enough that officials said Tuesday night they weren't aware he had swung off a tee. Tatis estimated those few swings he took were at about 40 percent strength.

The Padres are not putting a firm timetable on Tatis' return, but he could be back the series before or after the All-Star break, which is July 18-21. The progression toward that end will include swinging harder off the tee, hitting soft toss, hitting low velocity in the cage, hitting on the field, facing live pitching and rehab games in the minors.

"A little bit more every day," Tatis said. "You know, just getting out there. And we're testing it and seeing right now. Every time it feels a little better. We're progressing day by day. … It's nothing crazy you know. I'm just holding a bat, taking some dry swings. I still haven't got cleared by the doctors. It's day by day and everybody has different questions every day. We're just trying right now."