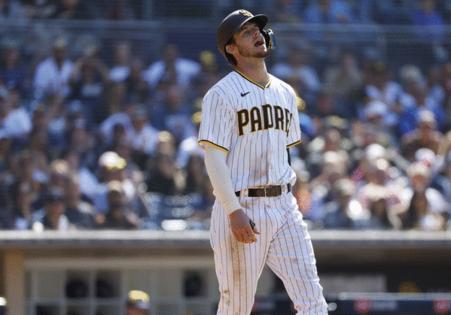 SAN DIEGO — There is so often no margin for error. There is no room, really, for anything else that doesn't go their way in many games the Padres play.

That has been OK much of the time.

Wednesday afternoon was one of the games in which it was not.

Yu Darvish tired near the end of an otherwise magnificent outing, former Padres infielder Luis Urías made a deft slide at third base, and the Brewers scored two runs in the seventh inning and held on for a 2-1 victory at Petco Park.

The Padres are getting the kind of starting pitching teams hardly dare to dream about.

Manny Machado is staging an MVP campaign, but the rotation's group effort has shouldered much of the lifting toward the Padres' 28-16 record.

But Wednesday was the latest occurrence of the offensive ineffectiveness that has practically become rote and has certainly become predictable.

The Padres' run Wednesday, which put them up 1-0 in the fifth inning, came on a fielder's choice grounder by Jurickson Profar. Their only other run in the last two games came in the first inning Tuesday on a double-play grounder by Profar.

The Padres were hitless in six at-bats with runners in scoring position Wednesday after going 0-for-5 Tuesday.

It is true the Brewers have one of the game's better pitching staffs. But when Wednesday was the 16th time this season the Padres have scored two or fewer runs — including half of their 20 home games — the opposing pitcher hardly seems worth mentioning.