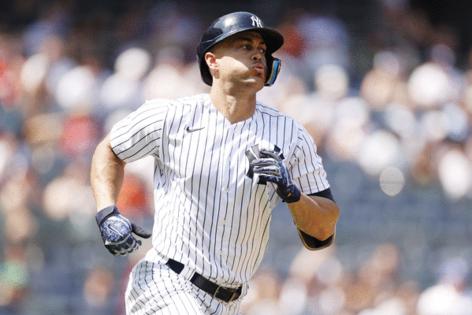 NEW YORK — When Aaron Boone sat down for his pregame press conference on Wednesday, the Yankees still had not released their starting lineup for the day. This came on the heels of DJ LeMahieu abruptly getting scratched from the lineup on Tuesday and Giancarlo Stanton leaving mid-game with a lower leg malady.

Boone was asked about Stanton, and his initial update was mostly a nothing burger.

“I don’t have a lot for you guys yet,” the manager said. “He just got here and got his MRI. We’re waiting to get that read.”

Then, less than 45 minutes before the game, it was announced Stanton was placed on the 10-day injured list with a right calf strain. Joey Gallo was also reinstated from the COVID IL.

It certainly does not seem like Stanton’s injury is very serious, but it was enough for the big man to pull himself out of a tight game in the seventh inning, and has now warranted some time on the shelf, something that Boone did concede was a possibility before the move was made official.

“I just talked to him, he is feeling pretty good,” Boone said. “We hope that he said something early enough to where this doesn’t become long.”

The big question around Stanton has been how much he’ll play the outfield, how that affects his offense, and now, if that had any impact on his health. Boone was questioned about whether the lower leg problem would limit Stanton’s defensive innings moving forward or his willingness to put him in the field once he’s healthy again.

“It won’t. We’ll go with him when he’s healthy,” Boone responded. “I think G and I both feel this way, playing the outfield is probably something that aids him in staying healthy. We obviously can’t push him too much. I don’t think it changes much.”

The manager said there’s also no set formula for Stanton’s defensive deployment or a magic number they try to meet over a certain amount of time.

“It kind of varies week to week,” he noted. “There was a week where he and I both felt like he needed a couple DH days in a row. There were other times where we probably played him two or three times in a row in the outfield. He and I have gotten really good at communicating with each other as we try and lay out the next days. It varies.”