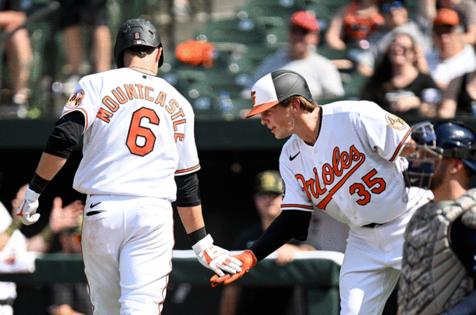 The Rays started with three straight hits — the last of which forced Orioles starter Spenser Watkins from the game with an injury — got a three-run home run from Isaac Paredes and scored four runs overall.

But there was an awful lot more to come, including a frustrating ending with a 7-6, 11-inning loss, the second time they were walked off in three days.

Rougned Odor bounced a ball that got past first baseman Ji-Man Choi to score the winning run off Dusten Knight, a reliever called up Sunday morning after Andrew Kittredge went on the injured list. Chris Owings bunted Adley Rutschman to third to start the inning.

All that after the Rays blew a two-run lead in the ninth, facilitated by a balk when reliever Ryan Thompson dropped the ball; sat through a 51-minute rain delay; then failed to score in the top of the 10th and 11th despite having multiple runners on base.

Thompson got off to a tough start in the ninth when Ryan Mountcastle blooped a ball to shallow centerfield that Kevin Kiermaier charged in and slid for but couldn’t grab.

An out later, Thompson walked Ramon Urias to put the tying run on first. While facing Odor, who beat the Rays on Friday, Thompson dropped the ball, moving the runners to third and second.

After a popup to third for the second out, with the dark clouds moving over Camden Yards and the wind swirling, pinch-hitter Austin Hays laced a single to leftfield to score both runs and make it a 6-6 tie.

There was plenty before that:

— Randy Arozarena continued his Baltimore bashing with two more hits, made a diving catch in the third that saved two runs and the lead, then an awkward-looking error on a fly ball in the seventh that cost the Rays a run.

— Former Seminole High teammates Brett Phillips and Joey Krehbiel got to face off for the first time in the majors. Phillips singled and stole second off the Orioles reliever, who was pressed into first-inning duty when Watkins was struck on the right arm by Choi’s 105.9-mph line drive and sustained a bruise. Phillips had three hits on the day.

— Manager Kevin Cash was ejected, for the first time since 2020, by home plate umpire Bill Welke after Choi was called out on strikes to start the fifth.

Cash’s last ejection came in the Sept. 1, 2020, game at Yankee Stadium, when he criticized the umpires and the Yankees after Aroldis Chapman threw a pitch at Mike Brosseau’s head, then made the threatening comment about having “a whole damn stable full of guys that throw 98 miles an hour.”

The Rays took the 4-0 lead in the first inning on the strength of Paredes’ third homer in four games, but the Orioles managed to keep it close, getting to within 4-2, then 5-3 and 6-4 beore getting even in the ninth.