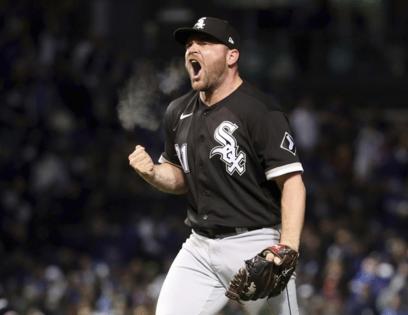 “Basically tried to call me Jackie Robinson: ‘What’s up, Jackie?’” Anderson said after the Sox’s 7-5 loss, describing what led to a discussion with Donaldson after the third inning. “He made the comment and it was disrespectful and I don’t think it was called for. It was unnecessary.”

The benches cleared before Donaldson’s at-bat in the fifth inning.

Donaldson admitted after the game, “I called him Jackie,” later adding: “I thought that was a joke between him and I because we have talked about it before. ... He’s called himself Jackie Robinson. That’s why I thought it was funny between us.”

That explanation did not sit well with Hendriks.

“Usually you have inside jokes with people you get along with, not people that don’t get along at all,” Hendriks said Sunday. “So that statement right there was complete bull(bleep).

“My feelings toward the individual in question are pretty well-documented in the fact that we don’t get along. The fact I have now spoken to four separate clubhouses he’s been in and as a whole, none of them get along. So trying to whip out that narrative is complete and utter bull(bleep).”

Donaldson’s “Jackie” reference dates to a 2019 Sports Illustrated article that came out soon after Anderson’s bat flip against the Kansas City Royals and subsequent plunking made news.

The article discussed a “have-fun barrier.”

“I kind of feel like today’s Jackie Robinson,” Anderson said in the article. “That’s huge to say. But it’s cool, man, because he changed the game, and I feel like I’m getting to a point to where I need to change the game.”