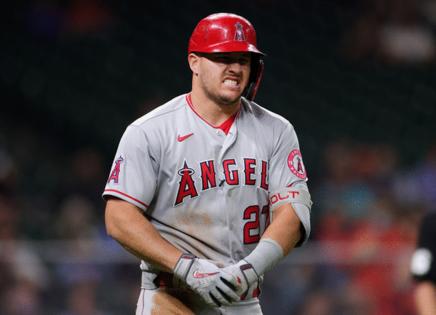 ANAHEIM, Calif. — Mike Trout burnished his Hall of Fame resume on Saturday night, the Angels star racing home with a milestone run in the sixth inning that put him in some elite company in franchise and Major League Baseball history.

With the 1,000th run of his career against the Oakland Athletics, Trout joined Garret Anderson (1,024) as the only Angels to score 1,000 or more runs.

Trout, the three-time American League most valuable player, also joined Willie Mays and Alex Rodriguez as the only players in baseball history to accumulate at least 1,000 runs, 300 homers and 200 stolen bases by their age-30 season.

The Angels beat the Oakland A’s 5-3 before a crowd of 39,045 in Angel Stadium, with closer Raisel Iglesias pitching a 1-2-3 ninth inning for the save.

Angels right-hander Michael Lorenzen navigated through some heavy traffic in the third and fourth innings to throw six shutout frames, giving up three hits, striking out five and walking two, to lower his earned-run average to 3.05 in seven starts.

Second baseman Luis Rengifo delivered a pair of decisive blows, the first a 94.6-mph line drive that hit Oakland ace Frankie Montas in his glove and pitching fingers and knocked him out of the game in the second inning, the second a solo homer that gave the Angels a 1-0 lead in the fifth.

The switch-hitting Rengifo, batting from the right side, snapped a scoreless tie when he turned on a 1-and-2, 90-mph fastball that left-hander Adam Kolarek left middle in and sent a 397-foot homer, his first of the season, over the wall in left.

The Angels loaded the bases with no outs in the sixth on a Shohei Ohtani single, a Trout walk and an Anthony Rendon single. Jared Walsh struck out, but Brandon Marsh drew a full-count walk off reliever Lou Trivino to force in a run for a 2-0 lead.

Rengifo followed with a chopper back to the mound. Trivino looked home but didn’t have a play on Trout, who scored to make it 3-0.

The Angels added two more runs in the seventh when Tyler Wade reached on a bloop single and switch-hitting shortstop Andrew Velazquez lined an opposite-field, two-run homer to left field to make it 5-0.