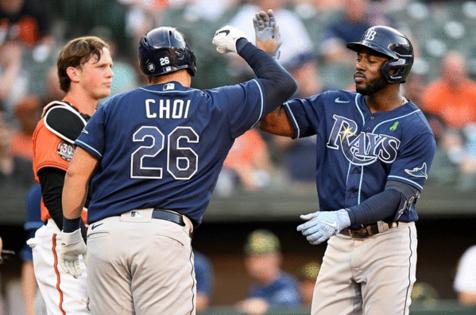 BALTIMORE — Randy Arozarena has a thing for the Orioles.

And he showed it again Saturday night, homering twice to lead the Rays to a 6-1 bounceback victory.

Jeffrey Springs lent a hand as well, as the lefty had the best of an impressive quintet of outings since moving into the rotation. He allowed one hit over a career-high 5 2/3 innings, walking four and striking out seven, while throwing 80 pitches.

So did Kevin Kiermaier, who homered and singled twice, giving him three straight three-hit games for the first time in his career.

The Rays (24-16) needed the win to move past the disappointment of Friday night, when they blew three leads and lost, 8-6 in 13 innings.

The win came without three of their top offensive players — Wander Franco sat out with a sore right quad, and Brandon Lowe (back) and Manuel Margot (hamstring) are on the injured list.

The only downside was that third baseman Yandy Diaz left the game after scoring a run in the sixth due to a left shoulder strain. He is considered day to day.

In 23 career games against the Orioles, Arozarena is hitting .400 (36 for 90) with 11 home runs and 25 RBIs. And he especially likes swinging at Camden Yards, where he has hit seven homers in 12 games.

To further illustrate, Arozarena has hit 34% of his regular-season homers (11 of 32) against the Orioles and has three of his five multihomer games against them.

Manager Kevin Cash was asked before the game about Arozarena’s dominance of the Orioles but didn’t have much of an explanation.

“I don’t have a good answer,’’ he said. “I know that some guys just have familiarity. They just have some success, for whatever reason. Probably a lot of luck is involved and you just get hot or see the ball.

“For whatever reason, it gets a certain team and then it goes the opposite way. But we’ll take the production.’’

Coincidentally, lefty Matthew Liberatore, the prospect the Rays traded to St. Louis in the deal to get Arozarena, made his big league debut Saturday, allowing four runs over 4 2/3 innings against Pittsburgh.