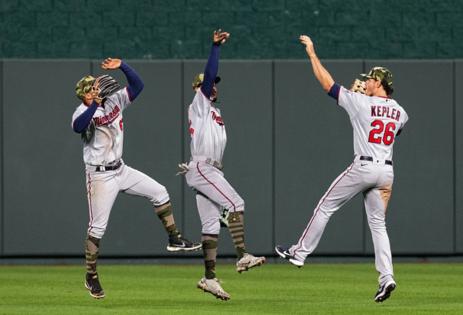 Whatever the reason, Sanchez seems to be boycotting first base. His two-out sixth-inning double on Saturday drove in Max Kepler with an important insurance run in the Twins' 9-2 victory at Kauffman Stadium, and continued a season-long pattern.

Sanchez now has 25 hits in 2022, but only eight of them have been singles. And 10 of Sanchez's last 11 hits, dating back to May 5, have left him on second base or jogging around all four.

"Getting Gary in the DH spot has been really good for us," Twins manager Rocco Baldelli said of Sanchez, who splits time with Ryan Jeffers at catcher, too, "and has helped us along the way this year."

Of course, few players have helped the Twins as much as Joe Ryan this season, and that pattern continued Saturday, too. The right-hander uncharacteristically allowed runners to reach base in four of the six innings he worked, but only once, when Andrew Benintendi followed a White Merrifield double with a run-scoring single, did he slip up.

"We have some younger pitchers here that are composed, and who do a good job of those types of things," Baldelli said. "Joe's especially good with it."

He now owns five wins in the season's first 40 games to prove it. And the Twins have four victories in the first five games of this weeklong road trip, which wraps up Sunday.

Luis Arraez kept up his own hot hitting, too, driving in two runs and scoring three others, meaning he's had a role in 11 of the Twins' 34 runs on this trip. His third-inning single to left field was the critical hit necessary to give the Twins an early lead for the fifth time in six games.

Arraez also led off the sixth and eighth innings by drawing walk, and he turned the opportunity into a run each time. Max Kepler doubled him home in the sixth, then scored on Sanchez's double, and a Carlos Correa single helped move him into position in the eighth to slide safely across the plate on Royals reliever Game Speier's wild pitch.

And in the ninth, Arraez collected his second RBI single of the night, once again going the opposite way, in the middle of a four-run uprising against reliever Foster Griffin.

Ryan didn't need all that offense, not with his usual command of the strike zone; he didn't walk a batter until his sixth and final inning. When he followed Benintendi's leadoff double with walks to Hunter Dozier and Carlos Santana to load the bases, Baldelli called upon Caleb Thielbar to get the final out. K.C. center fielder Kyle Isbel obliged by flying out to shallow left field.