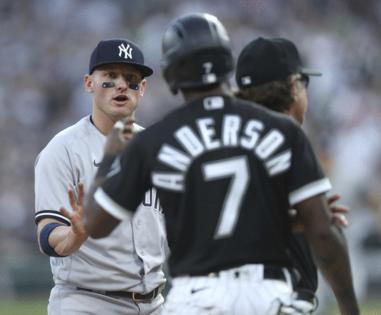 “Basically tried to call me Jackie Robinson, ‘What’s up, Jackie?’ ” Anderson said after the Sox’s 7-5 loss. “I don’t play like that.

“He made the comment and it was disrespectful. I don’t think it was called for.

“It happened the first time he got on (in the second inning) and I spared him that time. And it happened again. And it was just uncalled for.”

As Donaldson came to the plate in the fifth, he and Sox catcher Yasmani Grandal exchanged words. Moments later, both dugouts and bullpens emptied.

“What sparked it was a comment he made,” Grandal said. “This game went through a period of time where a lot of those comments were made and I think we’re way past that. It’s just unacceptable.

“Thought it was a low blow and I’m going to make sure I’ve got my team’s back. There’s no way you’re allowed to say something like that. It’s unacceptable.”

Added Sox manager Tony La Russa: “He made a racist comment, Donaldson. And that’s all I’m going to say.”