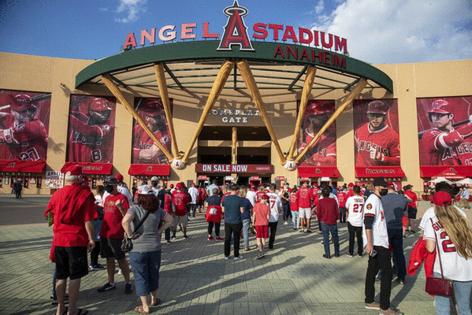 ANAHEIM, Calif. — Facing community pressure to delay or cancel the Angel Stadium sale amid a corruption investigation into Anaheim Mayor Harry Sidhu, the Angels on Friday gave the Anaheim City Council 25 days to grant final approval to the deal.

In a letter obtained by the Los Angeles Times that was sent on behalf of the Angels and SRB Management, and eventually made public, the development company led by Angels owner Arte Moreno, attorney Allan Abshez told the city that the team and SRB "have acted in good faith" and expect "that the parties will complete the transaction."

In concluding the letter, Abshez wrote: "SRB has met all its obligations and has every expectation that this transaction should move forward, and looks forward to the Council's final action no later than June 14, 2022."

Abshez did not say how the Angels and SRB might respond if the council declines to finalize the deal on that timetable. The deal has not closed, so Moreno can walk away from it.

The council has two scheduled meetings before the Angels-imposed deadline, one on Tuesday and the other on June 7. The council can also call a special meeting so long as it is limited to a single subject.

On Tuesday, an Orange County Superior Court judge placed a hold on a proposed settlement between the city and state, considered the last major obstacle to finalizing the sale. The California attorney general requested the hold on Monday, disclosing the corruption investigation and saying the allegations "call into question" the validity of the settlement and perhaps of the sale itself.

Under the settlement, called a stipulated judgment, the city would pay $96 million — the amount it was liable to be fined — into a fund to build affordable housing elsewhere in the city. Moreno agreed to return $96 million worth of those credits — in cash — and in exchange the city excused him from building four of every five proposed affordable housing units.

The California Department of Housing and Community Development (HCD) last week told The Times that the revised agreement between the city and state — called a disposition and development agreement (DDA) — should be rejected by the City Council.

"As we have stated repeatedly, the City of Anaheim and SRB's transaction violated the Surplus Land Act. We extracted the maximum penalty and additional commitments to affordable housing for this violation," Megan Kirkeby, HCD deputy director of housing policy development, told The Times in a statement.