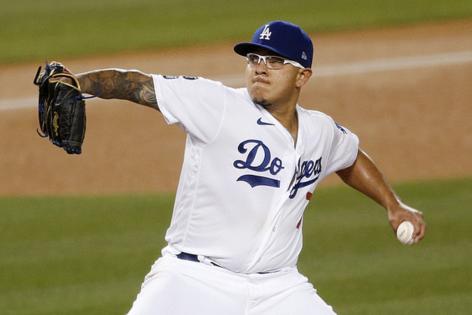 Hours before the game, a charter bus carrying manager Dave Roberts and six players blew a tire on its way to Citizens Bank Park.

“It was my first tire bust to a ballpark,” Roberts said with a laugh after arriving at the stadium.

In the Dodgers’ 4-1 win over the Philadelphia Phillies, his starting pitcher provided the exact opposite experience.

After giving up eight runs (five earned) and four homers in six innings against the Phillies last week — one of several Dodgers pitchers bludgeoned in a home series loss — Urias mowed through the hosts Friday during a scoreless five-inning gem.

Granted, reigning National League most valuable player Bryce Harper wasn’t playing for the Phillies, missing his fifth straight game after a platelet-rich plasma injection in his right elbow. Urias’ outing was impressive all the same. He retired the first eight Phillies and only one runner reached scoring position, Urias stranding a Kyle Schwarber double in the fifth. And the left-hander racked up five strikeouts without issuing a walk.

“He didn’t pitch well against those guys last time,” Roberts said. “So he’s a guy that wants to go out there and kind of have a little redemption.”

Added Urias, through an interpreter: “I made my adjustments, and I think tonight worked out really well.”

The only missing piece to Urias’ outing was more length, after the Dodgers turned to the bullpen at the start of the sixth with his pitch count at 80. It was reminiscent of Urias’ May 3 start against San Francisco, when he was lifted after six scoreless innings and just 65 pitches.

But it was inconsistent with the team’s decision a week later, when Urias was allowed to pitch into the seventh inning of a May 9 game against Pittsburgh despite looking far less dominant — a move that backfired when Urias gave up a home run to the last batter he faced.