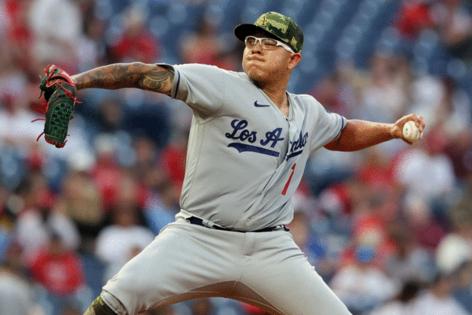 PHILADELPHIA — Just under a week ago, the Phillies faced Dodgers starter Julio Urías and put up eight hits and five earned runs against him. On Friday, they only managed to get two hits off the lefty, and only seven hits and one earned run against the Dodgers overall, in a 4-1 loss.

The Phillies attempted a rally late in the game that proved to be futile. With two outs, Kyle Schwarber doubled to center field, and J.T. Realmuto drove him in with a double of his own. Johan Camargo followed with a dribbler down the left-field line which got him safely to first and moved Realmuto to third. But Odúbel Herrera struck out swinging to end the inning.

Urías appeared to be attacking the Phillies differently Friday than he was in his previous start against them. On May 14, 47% of his pitches were four-seam fastballs, which he decreased to 34% on Friday night. He also relied more on his curveball (33%) on Friday than he did on May 14 (19%) and upped his change-up usage from 27% to 31%.

Another glaring difference between those two starts is that Bryce Harper was not in the lineup on Friday, but Harper shouldn’t be carrying an offense of this caliber, anyway. Which leaves the Phillies, after another loss, searching for answers yet again.

Among those struggling the most is Realmuto. After Friday night, the Phillies catcher is now batting .161/.242/.250 over his last 15 games. But Realmuto is hardly the only problem. Entering Friday’s game, four of the Phillies’ nine hitters had streaks that began with “0-for.” The collective slump is more glaring given the historic offensive performance they put together in Los Angeles, against this same team.

Following that Dodgers road series and entering the Phillies’ first game of their homestand, they led MLB in slugging percentage (.431) and OPS (.750) and ranked second in batting average (.256) and total bases (509). They had the highest average exit velocity in the National League at 89.7 mph, which ranked fifth in MLB. Entering Friday’s game, the Phillies had dropped to third in MLB in batting average (.251) and fourth in slugging percentage (.416) and total bases (531). They still are hitting the ball hard — they have the highest average exit velocity in the NL at 89.5 mph, which ranks seventh in MLB — but those balls just aren’t falling for hits.

One culprit could be that the Phillies aren’t drawing many walks. After Friday night, they ranked 25th out of MLB’s 30 teams in walks with 110, good for last in the National League.

With Harper gone, the middle of the order looks much less daunting, particularly with Realmuto hitting the way he has been. Realmuto was the Phillies’ cleanup hitter on Friday night, for just the 12th time in his nine-year career, at a time when he’s going through his worst slump of the season. That alone speaks to the impact of Harper on this lineup.

In his last start against the Dodgers in Los Angeles, on May 14, Ranger Suárez gave up only five hits over seven innings pitched. He had a bumpier start in his outing against the Dodgers at home, allowing four hits and three earned runs through his first two innings of work. By the end of the second inning, reliever Nick Nelson was warming up.

After allowing a single to Will Smith in the bottom of the third, Suárez evaded more trouble by striking out Justin Turner and inducing a double play. But after that inning, his night was over, as Nelson came in for the fourth. In all, Suárez allowed three earned runs, five hits, two walks and struck out five.

He had trouble locating his pitches, in general, but seemed to struggle particularly with locating his sinker. Of the 36 balls Suárez threw, 15 of them were sinkers. He threw 84 pitches through three innings.