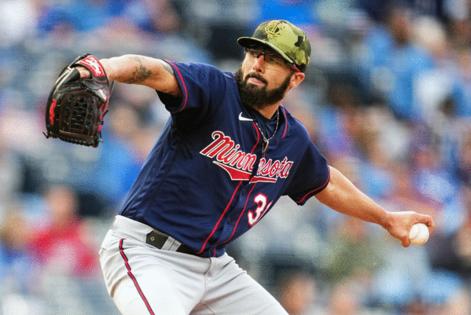 KANSAS CITY, Mo. — This Buxton-and-Correa Reunion Tour is off to a great start. Two great starts, in fact.

Carlos Correa's second game back from the injured list and atop the Twins' lineup with Byron Buxton began just like the first one, with the shortstop triggering a first-inning eruption that spotted the Twins' starter a three-run lead before ever taking the mound. This time, the beneficiary of all that first-inning firepower was Devin Smeltzer, and the result was a 6-4 victory, the Twins' fifth in seven games.

Buxton led off the game with a walk against Royals left-hander Daniel Lynch, who shut out the Twins for five innings in April but was nowhere near as sharp in Kauffman Stadium. Correa followed with a single, so did Kyle Garlick to score Buxton, and Gary Sanchez smacked his fifth double in a week to add another.

A Gio Urshela sacrifice fly made it 3-0, and gave the Twins 27 first-inning runs this season, more than any AL team except the Angels.

The bottom of the lineup chimed in an inning later, too. Jose Miranda snapped an 0-for-20 drought with his first hit since May 11, a leadoff single, and an infield hit and a walk loaded the bases with one out. Garlick brought Miranda home with a sacrifice fly, and for the fourth time in five games, the Twins won without ever falling behind.

The Twins' lead held up because Smeltzer surrendered only one run over 5 1/3 innings in his second major league start of the season, though he did it in an unusual way in this strikeout-heavy era. The left-hander faced 20 batters, walked one and watched the other 19 put the ball in play, becoming only the fifth Twins pitcher in the last decade to earn a victory without striking out a batter.

Coincidentally, Smeltzer was relieved in the sixth inning by the last pitcher to do it — Griffin Jax, who beat the Astros without a strikeout last August. Naturally, he struck out two of the three Royals batters he faced. (The other non-strikeout winners were Bartolo Colon, Mike Pelfrey and Scott Diamond.)

Smeltzer was lifted after retiring left-handed-hitting Andrew Benintendi in the sixth inning, an example of the Twins' data-driven nature warning of trouble ahead. Hitters have batted a collective .435, with an OPS of 1.350, when facing the lefty for the third time in a game.

Tyler Duffey was roughed up in the seventh inning, allowing a solo home run to Carlos Santana, the slugger's 31st career homer against the Twins, plus a single and a double. But Jhoan Duran cleaned up the mess by retiring Whit Merrifield on a sacrifice fly and striking out Benintendi on a 101-mph fastball. Emilio Pagan gave up a ninth-inning homer to Emmanuel Rivera but still earned his sixth save.

The game was the first of a schedule stretch that appears challenging by the relentlessness of it — 18 games in 17 days — but perhaps not so rough based on the opponents; the first 15 games are against the fourth-place Royals and the last-place Tigers.

"We're going to see these teams a lot. Facing the Royals and Tigers multiple times, you have to stay focused," Twins manager Rocco Baldelli said. "Playing against the same exact teams over and over again, sometimes that's not easy. You're not going to beat these teams the same way. So you've got to just stay on it and keep working. Not the easiest type of schedule, but we'll make do."