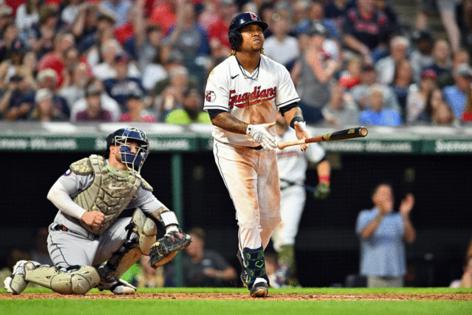 CLEVELAND — Then there were none.

Tarik Skubal, the last uninjured member of the Tigers’ original starting rotation, limped off the field after pitching five scoreless innings in Detroit's 6-1 loss to the Guardians of Cleveland Friday night at Progressive Field.

He was drilled in the lower part of his left leg with a line drive struck with an exit velocity of 104 mph by left fielder Ernie Clement. The third out of the fifth inning was made off the carom and when Skubal finally got back to the dugout, he signaled to acting manager George Lombard that he was done.

It’s been a ruinous run of bad fortune for the Tigers, and most of it centered on the starting rotation. If Skubal has to be shut down, he will join starters Eduardo Rodriguez (expected to go on the IL Sunday with soreness in his left side), Michael Pineda (finger), Matt Manning (shoulder), Tyler Alexander (elbow) and Casey Mize (elbow).

Spencer Turnbull, remember, has been out all year recovering from Tommy John surgery.

Before leaving, Skubal had shut the Guardians out over five innings, raising his consecutive scoreless innings streak to 19. The longest scoreless streak by a starting pitcher in the big leagues this season is 20. He’d allowed four hits.

Right-hander Jacob Barnes took over a 0-0 game in the sixth and in four pitches gave up four runs.

Brutal turn of events for the Tigers, who have lost three straight.

SAN DIEGO — Blake Snell was so much better, and then he reverted to being the guy who has struggled through the first half of both his seasons with the San Diego Padres.

The left-hander threw strikes and generally made ...Read More

PHOENIX — Kody Clemens was 4-for-34 when he stepped to the plate in the sixth inning of a 3-3 game Saturday night. There were two runners on and he was facing Arizona Diamondbacks lefty Joe Mantiply.

Clemens is a left-...Read More