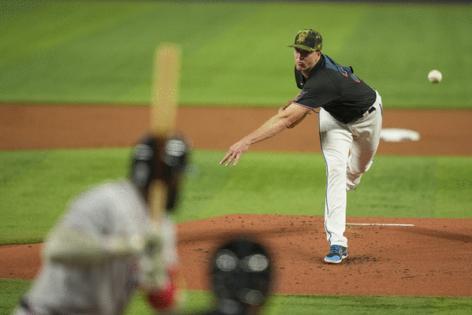 MIAMI — It took all of six pitches before the Atlanta Braves made their move against Miami Marlins starting pitcher Trevor Rogers on Friday.

Ronald Acuna Jr.’s line drive scorched off his bat into left field for a leadoff double that was just a sign of things to come.

The Braves teed off against Rogers, hitting three home runs and drilling the lefty for five runs on eight hits and two walks over just four innings as Miami ultimately fell, 5-3, at loanDepot park to begin a three-game series against the defending World Series champions.

The Marlins (17-21) cut their deficit to two runs in the sixth on a Jorge Soler two-run home run and had the game-tying runs in scoring position with one out after Brian Anderson hit a single and Jesus Sanchez hit a double.

But Bryan De La Cruz lined out to shortstop Dansby Swanson and Jacob Stallings’ fly ball to left-center field died on the warning track, feet away from being a go-ahead three-run home run.

Their subsequent chances fell short as well. Miami had runners on second and third with two outs in the seventh after a Jesus Aguilar infield single and Sanchez double before Avisail Garcia hit an inning-ending flyout.

They had a runner in scoring position with one out in the eighth when Garrett Cooper recorded a pinch-hit double. He moved to third on a De La Cruz groundout but was stranded after Stallings struck out swinging.

The late offense wasn’t enough to offset Rogers’ sluggish outing. The Marlins were down three runs after the first inning after Ozzie Albies’ RBI single drove in Acuna and Marcell Ozuna lifted a slider below the strike zone a projected 384 feet to left field for a two-run home run.

Swanson and Travis d’Arnaud added solo home runs in the second and third innings to pad their lead.