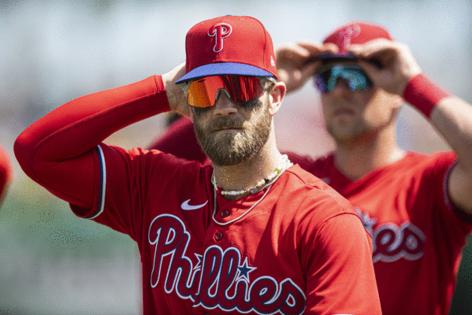 PHILADELPHIA — The final stanza of a nondescript Phillies loss was playing out Thursday afternoon when Bryce Harper popped his head out of the dugout.

“We were like, ‘You know, should we say what’s up to Bryce,' ” said Gavin McHugh, who was sitting in the Diamond Club at Citizens Bank Park with his buddies. “Yo, Bryce, what’s up?”

Harper, out of the lineup for a fourth straight day because of a sore elbow, waved — “We were like, that’s awesome,” McHugh said — and continued to chat with Aaron Nola against the dugout rail. The friends soon noticed Harper curiously lift off his maroon Phillies cap.

“My buddy is like, ‘Look at Bryce, check out his haircut.’ We’re just messing around,” McHugh said. “And then I’m like, ‘He’s signing that hat.’ We looked at each other, looked around to see if there were any kids he was going to give it to.”

And then Harper made eye contact with McHugh, who was sitting on the end of the row closest to the dugout. A 2‐0 loss to San Diego was no longer boring for the group of Malvern Prep alumni.

Harper tossed his signed hat to McHugh, who passed it to Keith Maguire. McHugh tossed Maguire’s hat to Harper. McHugh, a student at Auburn and host of a sports‐betting podcast, was the middle man for the hat exchange that was caught on the Phillies TV broadcast and immediately went viral.

“All of a sudden it was just everywhere,” McHugh said.

Harper told MLB.com after the game that he “just really liked the hat.” Maguire, a linebacker at Clemson from Media, bought the hat — a white snapback with the maroon Phillies logo — at the ballpark for $36. He left with a hat signed by Harper.

Maguire has no plans to sell it, keeping it as a memento from a moment that McHugh said was just wild. And even if he wanted to, Maguire can’t wear it.