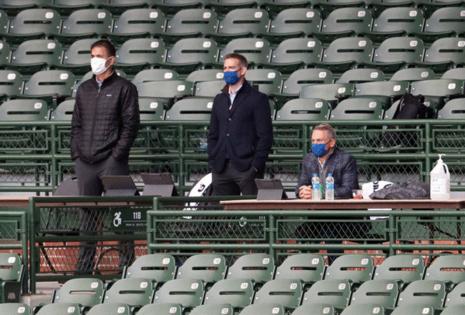 CHICAGO — The outcry over the trade of several star players has subsided over the last year, giving Chicago Cubs President Jed Hoyer a chance to breathe.

It has been almost 10 months since Hoyer dealt Anthony Rizzo, Kris Bryant, Javier Báez and other name players for a boatload of prospects at the trade deadline, starting a new era of Cubs baseball that had neither a label or a timeline.

Hoyer no doubt put his stamp on the team after years as Theo Epstein’s wingman. Have Cubs fans finally started buying in to the Hoyer’s game plan?

“I’m really proud of the way the minor leagues in general are playing,” he said Thursday before the Cubs lost to the Arizona Diamondbacks 3-1 in the opener of a four-game series at Wrigley Field. “You look at our record and performance at every level and it’s been really strong.

“You can never have enough depth or get to the point where you feel our system is good enough, but I feel like we’re on the right track, so hopefully fans know that by how well (we’re) playing.

“Ultimately, those trades are not going to be evaluated in the middle of May 2022. They’re probably going to be evaluated in 2027 for real, and that’s the way it should be. I don’t think anyone should be looking at it as a passing grade at this point. They should be looking at it as what does that net down the road. But on the basis of those trades and some good drafts and good international classes, I feel we’re definitely moving in the right direction in the minor leagues for sure.”

Many of the players Hoyer projects as part of his “next great Cubs team” are either in the minors or still waiting to be drafted or signed. But he has been able to watch pitchers Keegan Thompson and Justin Steele develop in the big leagues, much like Jamie Moyer and Greg Maddux in the late 1980s, and versatile infielder-outfielder Christopher Morel made a great impression in his first few days as a Cub.

The next big thing might be Triple-A Iowa starter Caleb Kilian — acquired in the Bryant deal — who reduced his ERA to 1.31 in his second win Thursday. Kilian was still being stretched out, but Hoyer didn’t discount the possibility of a call-up this season.

Hoyer’s most glaring decision is whether to trade popular catcher Willson Contreras, who will become a free agent after the season. Contreras is off to a great start and could bring back a few top prospects, but most Cubs fans are hoping he gets a deserved extension.

Hoyer said “our relationship is good” and he “loves the way” Contreras has played and led in the clubhouse but wouldn’t tip his hand about the catcher’s future as a Cub. In fact, Hoyer said thinking about trade-deadline decisions was “not at all where I’m at mentally.”