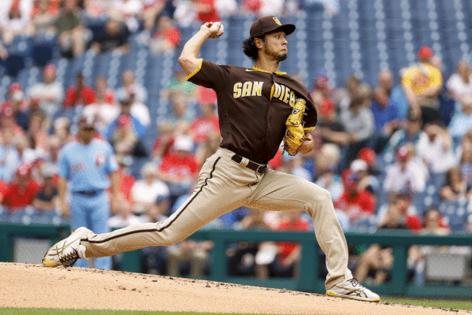 PHILADELPHIA — The Padres continue to thrive with a good pitching staff and a just-enough offense.

Through 38 games, that combination has them 10 games above .500 and has kept them from losing consecutive games for more than a month.

A 2-0 victory over the Phillies on Thursday afternoon at Citizens Bank Park was the latest exercise in walking a thin line between scary and exhilarating.

The Padres scored twice in the fourth inning and got seven scoreless innings from Yu Darvish before Luis Garcia recorded two outs in the eighth inning and Taylor Rogers got the final four outs to assume the major league lead with his 15th save.

Since losing two in a row to the Braves on April 15 and 16, the Padres have gone 19-9 and followed every loss with at least one win.

They rank 20th in the major leagues with a .664 slugging percentage, 22nd with 30 home runs and are tied for fourth with 24 victories.

The Padres are 4-2 on this trip and would secure their third winning road trip in the three they have taken this season by winning one of their three games this weekend in San Francisco.

They fell a run short of making it a perfect three-for-three at 3-0, as they won Tuesday’s series opener 3-0 and the Phillies won Wednesday by the same score.

The two runs they scored — on consecutive singles by Jurickson Profar, Wil Myers and Robinson Cano and Ha-seong Kim’s sacrifice fly — were plenty for Darvish.

The right-hander allowed six hits and did not walk a batter as he improved to 4-1 with his sixth quality start.