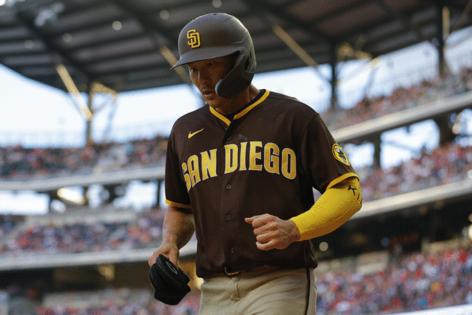 ATLANTA — The homer (and some insurance runs) did it this time.

It saved the Padres from their first losing streak in nearly a month. It saved Wil Myers from having to lament a costly blunder. It saved Robert Suarez from shouldering the weight of another lost lead.

Ha-seong Kim, after a series of long and far outs in the past couple weeks, finally put one where no one could catch it — into the visitors’ bullpen beyond left field — to put the Padres on top for good, and three relievers and four runs in the ninth inning kept them there in an 11-6 victory over the Braves on Friday.

Myers also homered, and the Padres have hit five in the past two games after not hitting that many in the previous nine games.

Where their three homers couldn’t make the difference in Wednesday’s 7-5 loss to the Cubs because Luis Garcia allowed two runs in the eighth inning, Garcia was among the trio of relievers who held the Braves scoreless the final three innings.

Garcia worked a scoreless seventh, Steven Wilson got two outs in the eighth and Taylor Rogers moved into a tie for the National League lead by earning the first four-out save among his 13 saves on the season.

That all turned a topsy-turvy affair into something of a rout.

The Padres took a 1-0 lead in the top of the third on a single by Kim, double by Austin Nola and sacrifice fly by Jose Azocar. The game was tied in the bottom of the inning on William Contreras’ home run. Eric Hosmer’s bases-loaded single in the fifth made it 3-1 before the Braves got another run in the bottom of the inning. Myers’ first home run of the season made it 4-2 in the sixth. Dansby Swanson’s three-run homer in the seventh sent most of the 40,635 fans at Truist Park into a tomahawk-chopping frenzy. Kim’s eighth-inning blast quieted them.

The ninth inning sent many of them for the exits despite the promise of a postgame fireworks show.

Myers made it 8-6 in the ninth with a sacrifice fly that drove in Hosmer, who was 3 for 5 and took over the league batting average lead from Manny Machado. Trent Grisham’s pinch-hit double cleared loaded bases to make for the final margin.

He met third base coach Dino Ebel with a ...Read More

TORONTO — As if a lackluster showing at the plate leading to being shutout for the sixth time this season could get worse, the demoralizing sight of shortstop J.P. Crawford limping off the field and going directly into ...Read More

Perez, who was the ...Read More

PHILADELPHIA — Bryce Harper plans to return to the Phillies’ lineup sometime this week, after his right elbow remained sore enough Tuesday from Sunday’s platelet-rich plasma injection to sideline him for a second ...Read More