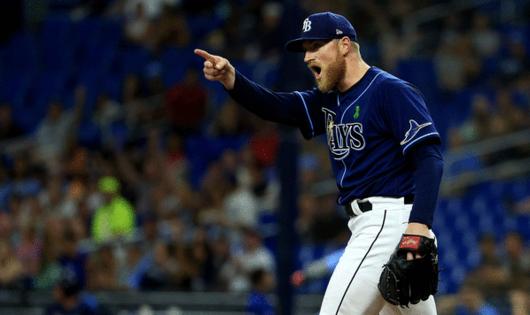 Not on Friday night.

The Rays were spectacular in the field while the Blue Jays were dropping hits, misplaying grounders and throwing the ball all around Tropicana Field.

That difference in defense had a lot to do with Tampa Bay’s 5-2 win against Toronto in the opening game of a homestand in front of an announced crowd of 10,169.

Although the Blue Jays only committed one error officially, they struggled to make plays all night. The Rays, meanwhile, got a diving catch from Randy Arozarena in left field, a leaping, spinning throw by Wander Franco at shortstop and two nifty, around-the-horn double plays started by Taylor Walls at third base.

Tampa Bay’s bullpen faltered again in the eighth inning as Toronto tied the game, but the Rays put together five hits against three pitchers — including a leadoff double by Mike Zunino — to score three runs in the bottom of the eighth.

Rays starter Drew Rasmussen was efficient, if not dominating on Friday. He had only one strikeout in 5 2/3 innings, but got 11 ground-ball outs including a double play in the fourth.

He had given up only one infield hit through five innings before Raimel Tapia reached on a high hopper to second. Bo Bichette followed with a walk and Vladimir Guerrero Jr. lined an RBI single to right field to bring a quick end to Rasmussen’s night.

Ryan Thompson struck out Teoscar Hernandez to end the threat.

Brandon Lowe led off the second with a high, 408-foot fly ball to the deepest part of the park. Center fielder George Springer had room to make the catch, but seemed to mis-time his jump and the ball went off the heel of his glove for a triple.

With the Toronto infield playing in two batters later, Ji-Man Choi hit a chopper over Gausman’s head that shortstop Bichette fielded quickly and threw home, but Lowe’s slide avoided the tag for the game’s first run.

The Rays got another break in the fifth when Kevin Kiermaier’s ground ball bounced high off the plate before Gausman fielded it. With Kiermaier busting it down the line, Gausman hurried the throw and sent the ball into right field for a three-base error.

Zunino followed with a line drive single off the wall in left field to drive the run home.

He met third base coach Dino Ebel with a ...Read More

TORONTO — As if a lackluster showing at the plate leading to being shutout for the sixth time this season could get worse, the demoralizing sight of shortstop J.P. Crawford limping off the field and going directly into ...Read More

Perez, who was the ...Read More

PHILADELPHIA — Bryce Harper plans to return to the Phillies’ lineup sometime this week, after his right elbow remained sore enough Tuesday from Sunday’s platelet-rich plasma injection to sideline him for a second ...Read More