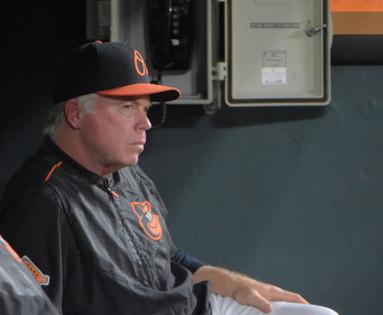 If baseball’s winter meetings were being held this week as scheduled, former Orioles manager Buck Showalter would have likely been in Orlando, Florida, with the rest of the baseball world as part of a television team — and the set lights wouldn’t have been the only ones shining on him.

The most successful manager in recent Orioles memory has been in the headlines for the past week in connection to one of the game’s only remaining non-lockout storylines, as he is reportedly a candidate for the vacant skipper seat with the New York Mets.

MLB Network reported Tuesday evening that Showalter will interview for the job Wednesday, and amid reports that he’s ownership’s preferred choice, he seems like a strong bet to be back in a dugout once baseball returns in 2022.

Since he last managed the Orioles in 2018, Showalter has been the topic of several such bits of speculation regarding different jobs around the game. Perhaps most notably, he was in the mix to take over the Houston Astros for the 2020 season after their sign-stealing scandal forced a management clear-out in the winter of 2019.

That job, which ultimately went to Dusty Baker, would have been a different one than Showalter’s resume best fits. He began his career turning around the New York Yankees in the early 1990s, with one of baseball’s best teams before the 1994 strike and a playoff club in 1995. He won 100 games and a division title with the expansion Arizona Diamondbacks in just their second season in 1999, and took the Texas Rangers from 71 wins in his first season (2003) to 89 a year later.

When he came to the Orioles late in 2010, they were mired in over a decade of losing. By 2012, they’d won 93 games and made their first of three playoff appearances in his tenure with the Orioles.

The Mets, which were a talented but star-crossed team in recent years, could use that kind of turnaround. It might happen regardless of who manages, with Cy Young winner Max Scherzer, outfielders Starling Marte and Mark Canha and infielder Eduardo Escobar all signing in a flurry before the lockout.

But just because Showalter, as former star outfielder Adam Jones noted, is a level-raiser and can quickly bring a high standard to an organization doesn’t mean it will be a tidy fit should he end up back in New York.

The Orioles of the 2010s had success for a variety of reasons, including a strong core pieced together before Showalter and executive vice president Dan Duquette arrived and some shrewd moves to supplement that core and build a standout bullpen. Harmony, however, was not one of those reasons.

There was a chasm between the front office and field level in terms of the flow of information and building a holistic message throughout the organization, and that Showalter is reportedly the preference of billionaire owner Steve Cohen means there might be a line to the top that doesn’t go through the front office for the veteran manager.

More recently, teams have opted for field managers that are extensions of the front office, and while more traditional managers like Showalter and Tony La Russa have had the success they’ve had by digging into the numbers and finding advantages, the modern-day movement toward data-driven decision-making makes their hunches and experience less valuable in the estimation of many.

That said, the Mets don’t seem to be in the project business. They wouldn’t need Showalter to maintain the course, but rather would want him to chart one to a championship quickly with a roster that could cost $300 million next year.

For teams with the kind of resources the Mets have, such as the Yankees and Los Angeles Dodgers, the projects are sustaining their industry-leading player development arm so they can maintain some inexpensive talent around their high-priced stars. Perhaps the Mets are aware of that and know that on their long list of candidates, Showalter will be most effective to achieve the immediate results their offseason moves demand.

One thing is for certain, though: the spotlight act Showalter perfected in Baltimore will be box-office back in New York at this stage in his career. Perhaps the Mets know that, too.