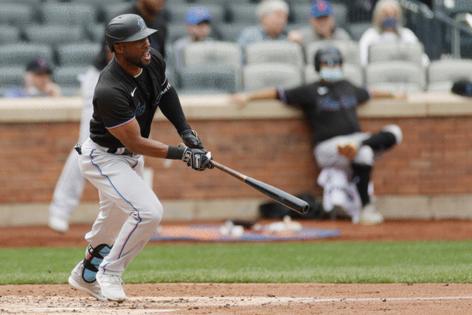 That was also the last time the Mets had an outfielder (Carlos Beltran) post 5.5 Wins Above Replacement, according to FanGraphs.

The last time the Mets had a player steal at least 40 bases with a wRC+ above 134 was … never.

Starling Marte met all those statistical thresholds last year, a season he spent playing for both the Marlins and Athletics. His final line from the 2021 campaign — .310/.383/.458 with a 134 wRC+, 27 doubles, 8.2% walk rate and a major league-high 47 stolen bases — all paired with above average defense in center field, makes him a type of player that the Mets have never had before.

Several of those statistics — namely the stolen bases, wRC+ and on-base percentage — matched or set a new career-high for Marte. That was unusual for a player in his age-32 season, but also why the Mets felt comfortable giving him a $78 million deal that will pay him until he’s 36.

“There are a lot of Latinos on this team, I think this team is really good, and I also have a lot of family in New York,” Marte said through translator Alan Suriel at his introductory press conference. “So I felt like it was the right time for me.”

During the same press conference, Mets general manager Billy Eppler wouldn’t definitively say whether Marte would take over the everyday center field role. Brandon Nimmo started 82 games there last year compared to just three in each of the corner spots and handled the position more than admirably. At 28-years-old and with much less mileage on his body than Marte, Nimmo may very well be better suited for the outfield’s most important job, and Marte spent the first six years of his career primarily in left.

In those first six years of his MLB career, Marte helped raise the Pittsburgh Pirates’ ship, making three postseason appearances and the 2016 All-Star team. The Dominican-born righty also raked in two Gold Gloves as Andrew McCutchen’s left fielder. An 80-game suspension for Nandrolone, a performance-enhancing substance, limited him to 77 games in 2017. But he rebounded in 2018 and 2019, posting at least 3.0 WAR in each season and proving to be one of the league’s most consistently effective outfielders.

When he plays his first game as a Met, Marte will be three seasons and four teams removed from his career as a Pirate. He didn’t leave his prime in Pittsburgh, though. If anything, Marte is getting better in several important facets of the modern game. An increased patience at the plate — the only time Marte swung at a lower percentage of total pitches than he did last year was his 47-game rookie year — led to the best walk rate of his professional career. Getting on base means more opportunities to rev his speed up, and wouldn’t you know it, the first time he won the stolen base crown was also the first year his on-base percentage crested above .365.

Marte’s plate discipline will be something to watch. A continued, refined approach would benefit both him and his new team. Taking a walk in front of Pete Alonso means that the Polar Bear’s solo homers, which 18 of his 37 four-baggers last year were, pack an extra punch. Of course, batting in front of Alonso could also mean more pitches to hit for Marte, perhaps leading to a jump in his own power numbers.

According to FanGraphs, Marte was also the best base runner in the league last year. By their estimation, he created 12.3 more runs on the base paths than the average player. This will be the most striking difference Marte brings to the Mets. Their best 2021 base runner was Jonathan Villar, and the lineup had three regulars (James McCann, Dominic Smith and Pete Alonso) that were at least three runs worse than the average runner.

As a team, the Mets ranked 27th out of 30 teams in FanGraphs’ baserunning metric and swiped a mere 54 bags, seven more than Marte had by himself. While stolen bases have fallen out of style across the league, being able to score from second on a single or first on a ball in the gap will always have a place in the game, especially for a cement-footed team like the Mets.

Whoever the next Mets manager is, they’ll have a player who does everything well. While not quite a true five-tool player — Marte has only slugged .500 or better once — this is a man who can run, throw, field and hit for average. On top of that, Marte should not only be an all-important adult in the room, Steve Cohen’s November spending spree means he won’t be the only one.

Marte could, though, become the only Met of the Citi Field era to hit 20 home runs and nab 20 bases. To the joy of the team’s defeatist fan base, he’s also not even the most exciting pickup of the offseason. Whenever the lockout ends and those fans can pack the 7 train again, they’ll be on their way to see a potentially once-in-a-blue-moon Met.