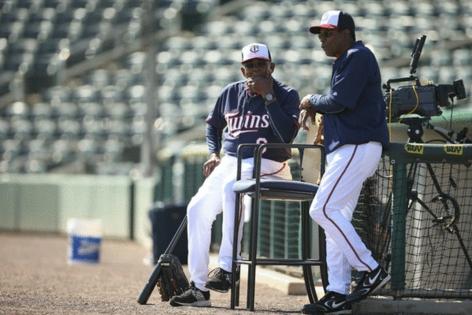 Tony Oliva was magnificent to watch as a hitter. The rest was OK, too; good speed and judgment as well as a strong throwing arm in right field. But as a hitter, the images remain for those of us who are vintage Twins followers.

The first notice of his hitting talent came from the Sporting News, during its time as the "Bible of Baseball." Late in the summer of 1961, in its minor league reports in the back of the weekly newspaper, there was a note that Tony Oliva, a young Twins farmhand, had won the Appalachian League batting title with a .410 average.

This was the lowest level of the minors, but .410 grabs your attention and keeps you looking out for that name . . . even though minor league information came at a rate slightly faster than the Pony Express in those days.

The Twins were ready to install him as the right fielder in 1964. We read the communiques from spring training lauding Tony's line drives, but we didn't see those for ourselves until the start of the regular season.

Televised games were precious commodities in 1964. I'm guessing we were allowed to see the opener in Cleveland on April 14, when the rookie left-handed hitter had a couple of hits, and then came the moment that Tony O.'s potential for greatness was fully revealed on Twin Cities television:

The first game of a doubleheader in Detroit on Sunday, April 19, was the fifth game of Oliva's rookie season. The Twins had played one game in Cleveland, then three at Washington, and Oliva's average was .474 at the start of Game 1 in Detroit.

Phil Regan was the Tigers' starter. Tony was batting second. He ripped a single, sending Rich Rollins to third, from where Rollins scored the game's first run.

Rollins had singled in Bernie Allen to make it 2-0 in the second. Oliva stepped back in. Regan threw a fastball directly at Oliva's head. Tony went sprawling backwards in the batter's box.

Cross my heart and hope to cover another four-hour ballgame, I still can see this: Tony rising slowly, brushing off the dust, and getting back into the same place in the box as he was when Regan attempted to maim him.