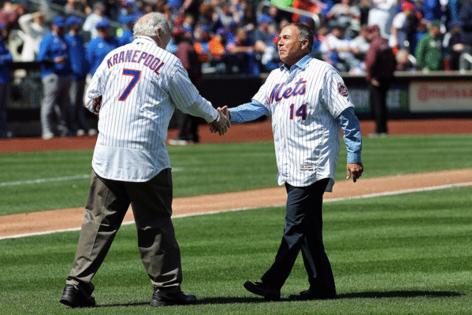 “When I received the phone call and I heard, ‘I am very happy to tell you,’ I was hysterical. I cried terribly, because I honestly couldn’t believe it was really happening,” Irene Hodges, the oldest daughter of the late Gil Hodges, said Monday. Less than 24 hours earlier, she had learned that her father was finally voted into the Baseball Hall of Fame by the 16-member Golden Days Committee.

“I hadn’t even told my mother about the voting because I didn’t want her to be disappointed,” Irene said of 95-year-old Joan Lombardi, Hodges’ widow. “And I didn’t want her to think about it... I said ‘Mommy they want to tell you that Daddy is voted into the Hall of Fame.’ And she put her hand on her chest and said ‘Really? He really did it? Oh Gil, I’m so happy.’”

Hodges — a seven-time All-Star first baseman with the Brooklyn Dodgers and 1969 World Series-winning manager of the Mets — died of a heart attack during the Mets’ 1972 spring training. He was snubbed by Cooperstown for years before finally making it on his 35th try.

Irene said Monday that if her father were still alive, he would have been shocked.

“I can remember once just saying to him, ‘so you think you’re going to be in the Hall of Fame?’ He said, ‘no, not me.’ But he underestimated himself and how good he was,” she said on a Zoom call Monday with her siblings Cindy and Gil Jr. and former Mets Ed Kranepool and Art Shamsky.

That was just who Gil Hodges was, according to his son.

“Being the only boy I got to travel a lot with him and the Hall of Fame was never a subject again,” Gil Jr. said. “We’re speaking about someone that was 47 years old (when he died). So no one thinks at 47 that not only your career is coming to an end, but your existence, but he was the type of person who, if he were alive through all of this process through the 30-some odd times... he would have taken each one in in stride. It would have never been anything that he would get upset about.”

Though his official induction ceremony won’t happen until the summer, his placement in the Hall of Fame gives closure to his storied career in the Big Apple.