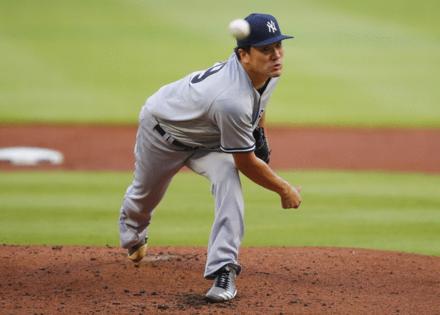 NEW YORK — There will be no reunion in the Bronx for Masahiro Tanaka and the Yankees in 2022. The former Yankee right-hander had hinted he was looking to come back to MLB — preferably the Bronx — after playing a season back at home. He had even noted the day he signed that his contract he had included an opt-out after the 2021 season.

On Friday, however, Tohoku Rakuten announced that Tanaka had decided to play out the second year of the contract and will return to the Golden Eagles in 2022.

It had been an unlikely possibility that Tanaka would return to the Yankees. After all, they let him walk as a free agent after the 2020 season and were vague whenever asked about a possible return over the winter before he signed in Japan. It had been a successful relationship, however, and no doors were closed.

The Yankees, however, let him walk after going 3-3 with a 3.56 ERA in 10 starts during the coronavirus pandemic-shortened 2020 season. Known as a big-game pitcher, the 33-year-old’s reputation for stepping up in the playoffs got tarnished that year. He got tagged in both of his playoff starts, allowing 11 earned runs in eight innings over two starts against the Guardians and the Rays.

But a reunion with the Yankees wasn’t totally off the table, especially considering how their rotation didn’t pan out in 2021. Young starters who they thought would help fill his place in the rotation failed to progress this season. Deivi Garcia and Clarke Schmidt went into 2021 spring training expecting to compete for the spot Tanaka’s departure created and neither came close. Garcia struggled in the minors all season and Schmidt dealt with an elbow injury that kept him sidelined for months.

Going into 2022, the Yankees’ rotation is still riddled with question marks after Gerrit Cole.

Free agent Corey Kluber bolted for, as he said, “a chance to win a World Series,” with the Rays. Jameson Taillon flashed his talent this season with a strong stretch in July, but then succumbed to an ankle injury that required offseason surgery. Luis Severino pitched just 7 1/3 innings this season as his return from March 2020 Tommy John surgery was set back by leg and shoulder issues. Domingo German, who missed all of 2020 serving a suspension under the league’s domestic violence policy, had his return cut short by a shoulder injury that cost him significant time on the injured list.

Jordan Montgomery and Nestor Cortes, Jr. are the two most solid returning starters behind Cole, who finished third in American League Cy Young voting. Luis Gil showed the tremendous potential that has the Yankees excited, but also that he needs more time to mature.

So it’s clear that the Yankees will have to find some veteran starting pitching to strengthen the rotation.

It’s probably not a coincidence that Tanaka opted to finish his two-year contract with the Eagles Friday, a day after MLB’s business shut down sending the free agent market into uncertainty. All MLB transactions are on hold as the league’s owners locked out the players on Thursday morning, meaning any free agent is in limbo until the union and owners can settle on a collective bargaining agreement.

But Tanaka certainly made a case for a return.

After starting slow, Tanaka had a nice comeback season in Japan. He threw 155 2/3 innings for the Eagles and pitched to a 3.01 ERA. He struck out 126 for a 20.19% strikeout rate and walked just 4.65%. Another solid season like that and at age 34, Tanaka could very easily find a market back in MLB next winter when business is more settled.