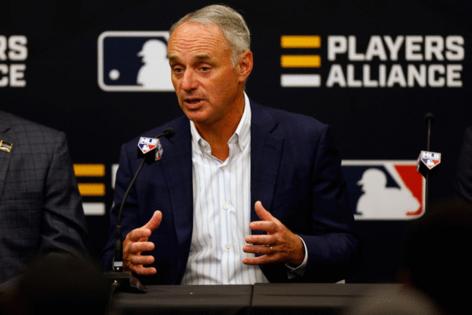 LOS ANGELES — In the final hours before baseball as we know it shut down, Max Scherzer took a few minutes from his obligations to the players’ union to hold a news conference about why he signed with the New York Mets. Scherzer, however, did not pass up the opportunity to explain what the players prioritized in a new collective bargaining agreement.

The clock struck midnight on the East Coast, the old agreement expired, and major league owners immediately imposed a lockout.

“This defensive lockout was necessary because the Players Association’s vision for Major League Baseball would threaten the ability of most teams to be competitive,” Commissioner Rob Manfred wrote in an open letter.

Tell it to fans of the Baltimore Orioles. The Orioles have lost at least 108 games in each of the last three full seasons, finishing a combined 158 games out of first place. They have tried to lose, and at that they have succeeded, spectacularly. They also have killed attendance in a great baseball town.

When the Chicago Cubs won the World Series in 2016 and the Houston Astros followed in 2017, owners marveled at the efficiency: Lose for a few years, stock up on young talent in the process, and win!

But only one team can win each year, the Cubs and Astros are large-market teams that bought free agents to complete their rebuilding cycles, and in any case the winners since then have been large-market teams that resisted tanking: the Boston Red Sox in 2018, the Washington Nationals in 2019, the Dodgers in 2020, the Atlanta Braves in 2021.

This is no longer a model for the Pittsburgh Pirates to follow, if it ever was. The union wants to do whatever it can to discourage that model, in the interest of the game and in the self-interest of its veteran players who must take pay cuts if they can find a job at all.

In his open letter, Manfred said the owners had heard the union concerns and responded to them with proposals: a minimum payroll for the first time; an increased minimum salary; an NBA-style draft lottery so the team with the most losses would not necessarily pick first; free agency at a certain age rather than after a certain number of seasons so teams would not delay the start of a player’s career.